A Kiev Pechersk Lavra tour can be one of the most fascinating experiences you can have when in Ukraine. A UNESCO World Heritage Site, this cave monastery is one of the most important historical sites in the country. 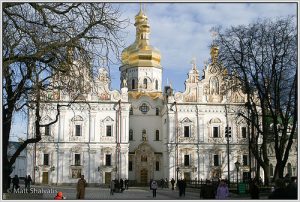 The monastery can be found in Kiev. It is not far from the metro station. If you avail of a travel package tour, they will provide the transportation and take you there.

The monasteries are set along the Dnipro slopes. They are composed of churches with gold domes. There are also several mummified monks. These mummies were placed in labyrinths underground.

Several of the monastic edifices there have been converted into museums. A Kiev Pechersk Lavra tour will take you to the Ukrainian Museum of Historical Treasures. The collection here is one of the most extensive in the whole site.

There are many churches in the site. Among them are the Church of the Exaltation of Cross, Church of the Saviour at Berestove and the Refectory Church. Other buildings in the complex are the Kiev Theological Academy and Seminary, St. Nicholas Monastery and the Debosquette Wall.

Also worth checking out is the Gate Church of the Trinity and the caverns. There are over one hundred burials in the site. The best known are Ilya Muromets, Pope Clement I, Yuri Dolgoruki, Oleg son of Volodymyr II Monomakh and St. Spyridon.

This Orthodox Christian monastery was established in the year 1015. Since that time, the area has become the focal point of Orthodox Christianity in Eastern Europe. In 2007, the site was named as one of the Seven Wonders of Ukraine by way of an Internet poll.

The management of the site is divided between the Ukrainian Orthodox Church and the National Kiev-Pechersk Historic-Cultural Preserve. In 2010, a UNESCO monitoring mission evaluated the site. It was determined that the site was still intact. The organization concluded that there is no need to put the site in the blacklist.

Tours of the monastery and the nearby areas will cost 90 Euros or about 125 USD.

The architectural monuments vary. Many of them are stone fortifications. Apart from those mentioned earlier, the other attractions include the Great Lavra Belltower. There is also the Dormition Cathedral. This is a reconstruction of the cathedral that was destroyed in World War II.

A Kiev Pechersk Lavra tour can be held anytime from 9:30 am until 8:00 pm. The monastery is closed on Mondays.