Killarney National Park in County Kerry – Ireland is the very first national park in the country. It is located right next to the town of Killarney, County Kerry. The park itself was established in 1932. The original donated lot has been expanded ever since and now covers an area of more than 102 square kilometers or roughly over 25,425 acres. It is maintained and managed by the National Parks and Wildlife Service of Ireland.

The area that the Killarney National Park in County Kerry – Ireland covers has a rich history behind it. In fact, it has a lot of archaeological remains. Archaeologists have found evidence of copper mining. This means that the early inhabitants of the area were able to advance their civilization to the Bronze Age.

There are many clearings in the park’s woods that have been around since the Iron Age. There is also a well preserved stone circle located near Lissivigeen. The other archaeological remnants that visitors will find here date back to early Christianity. There are monastic ruins that date back to the 7th century. A rather important archaeological find is Inisfallen Abbey that also contains the Annals of Inisfallen, which is a record of the early history of the Irish nation. 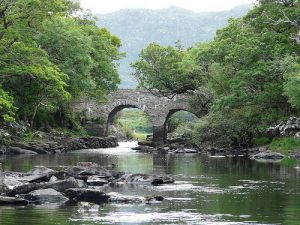 Muckross Abbey is another important archeological remnant that dates back to 1448. During the 18th century, these woods were used for charcoal production, tanning, and cooperage. It was during this time when massive amounts of oak trees were cut down to fire up smelters in the local iron industry in the area.

If you love the great outdoors, then visiting this park is one great activity. People usually organize fund raising activities and gather in the park. Other outdoor activities that are popular in this park include pony trekking, boating, canoeing, fun runs, cycles, orienteering, and other commercial activities as well. However, do take note that before anyone can organize any event in this park, they will have to secure the necessary permits.