The attractions at Kinderdijk village has led to it being declared as a UNESCO World Heritage Site. Although the site is old, it still retains its charm and never fails to draw in tourists all over the world. 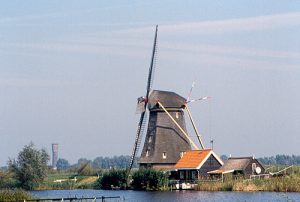 The village is at South Holland south at the Netherlands. The easiest way to reach the site is by going on the Rotterdam Lombardijen station. You will find this in most cities around the country.

After departing from the station, cross the tram lines and the street. You will see the bus stop. Take bus 90. After 45 minutes you will reach the village.

The Windmill Park is the home of several windmills. You will not only see the windmills but also learn a lot about them. You can also go on a boat tour of the site and enjoy the scenery. Apart from the boat ride, you can rent a bike and see the whole place.

During the 13th century, problems with water became more apparent. To put an end to this problem, big canals (dubbed weteringen) were created. But the drained soil began to set and water level went up.

After a few centuries, the villagers realized that another way to keep the polders from getting wet was needed. They decided to construct windmills just enough to bridge the difference in the water.

The windmills also had to be enough so water could be placed at the reservoir at the appropriate level. Today, a couple of diesel pumping stations are utilized. But some of the windmills are still active. Most of them however, are now just tourist attractions.

The name of the village means children’s dijk. if you are visiting the area for the first time, remember that it is at Nieuw-Lekkerland municipality. This is about 15 kilometers from Rotterdam.

The attractions at Kinderdijk village are at the polder at the confluence of the Noord and Lek rivers. Today there are many online tour operators that offer tour services for those who want to see the village.