Knossos in Crete is the most important archaeological site on the island. Based on the excavations, the area may also have been the religious and political center of the Minoan civilization. 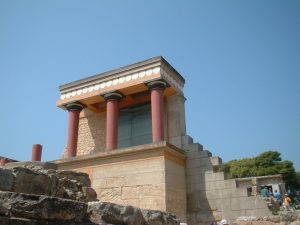 The archaeological site can be found 3 miles (5 km) to the south end of Heraklion.

There are 1,300 rooms in the palace linked by corridors. There is a theater, storerooms and the Minoan column. There is also evidence indicating frescoes dominated the walls.

The frescoes depict ruddy skinned males and white skinned women. Unlike other ancient civilizations, there are no artistic depictions of military conquests or activities.

The focus is on fishing and bull leaping. There is also a throne room. The most notable feature here is the alabaster seat. The room could be accessed by way of two double doors. The throne room has frescoes of griffins adorning its sides.

There is still some debate on whether the place was purely a religious center, a government building or both. Nevertheless, diggings show the area had been inhabited as far back as 7000-3000 B.C. (Neolithic period).

The ruins were unearthed in 1878 by Minos Kalokairinos, an antiquarian and merchant. Kephala Hill was the sight of the first excavations, unearthing the storage rooms.

On March 16, 1900, the archaeologist Sir Henry Evans bought the whole site. This allowed for large scale digging that unearthed the whole palace and surroundings.

The palace and the island are said to be the basis for the legend of King Minos and the Minotaur. Legends state that the half man, half bull Minotaur was the product of the union between a bull and King Minos wife.

The palace is also believed to be the basis for the legend of the Labyrinth, the structure made for the king by Daedalus. The Labyrinth was constructed for the Minotaur who would eventually be slain by Theseus.