The Kornati National Park in Zadar is known for its beautiful islands and diverse wildlife. It is one of the best known tourist destinations in Croatia. 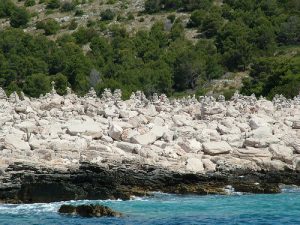 The park and the islands that make it up are in the northern sector of Dalmatia. The archipelago is to the west from Sibenik at the Sibenik-Knin county.

The park is made up of 109 islands. The most important are the Stomorski group of islands. These include Mala Proversa, Taljuric, Levrnaka, Ravni Zakan resort island and the Lavsa Bay.

Seagulls make up a lot of the marine life in the area. There are also plenty of ring-snakes and lizards. There are rodents, amphibians and about 70 species of butterflies.

There are also plenty of sponges, algae and corals under the waters. The Kornati National Park is also home to the mollusc Pinna nobilis. There are also reports the Mediterranean monk seal (Monachus albiventur) is still sometimes seen in the area. Part of the attraction here of course, is island hopping and enjoying the scenery.

If you are visiting the islands for the first time, remember the average temperature in July is 23 C, but it drops to 7.3 C in January.

Most of the terrain at the islands are karst-limestone. These are sediments that emerged from the sea. Research has revealed that there are fossils in the stones. The remains here consist of fish and crustaceans. There are several types of karst on the island.

Through natural processes, various types of land formations have appeared. These include unexplored caves, flat lands, cliffs and other unusual shapes.

The cost of tours varies, but the trips typically cost around 230 K or so.

There are many tour operators that can take you around the Kornati National Park. Their services vary, so make sure that you compare the prices first.