Silesia is considered as a historical region of the country of Poland, with castles and fortresses; as well breathtaking Gothic and Baroque architectural structures spread out over its different cities.

Ksiaz in Silesia – Poland is a castle and one of these historical structures that offer guests a brief glimpse of the region’s past; particularly during the Second World War. 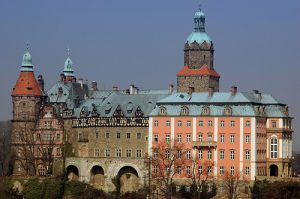 Ksiaz in Silesia – Poland is located in the city of Walbrzych which in turn is situated in Lower Silesia.

If you will be flying in to Poland, the nearest international airport to Walbrzych is one that is located in Wroclaw, the capital city of Silesia.

From Wroclaw, you can either take a car hire service or public transport to reach Ksiaz in Silesia – Poland.

If you will be taking your own car hire service, follow Route 35 going towards Walbrzych. Once you get into the city, there are signs that will direct you to the castle.

You can also take a bus or train service going to Walbrzych right from Wroclaw. From Walbrzych, there is a local bus that can take you to the entrance to the castle.

Visiting Ksiaz in Silesia – Poland, you can take a guided tour or an individual tour of the castle complex.

The tour is divided into several categories: Maximilian’s Route, Mysteries of the Second World War Route, The Tower, and The Terraces.

The route that will take you through the Mysteries of the Second World War will give you a brief glimpse of the castle’s participation during WWII. You can see the oldest Gothic section which had undergone several alterations during the Second World War.

From the ballroom, guests can go through the Hunting Foyer and through Conrad’s Hall from which a staircase will lead you to the Terraces.

Fortifications of the castle Ksiaz in Silesia – Poland were destroyed by Bohemia’s Ottokar II some time around 1263. Between the years 1288 and 1292, the castle was rebuilt under the reign of the Duke of Swidnica and Jawor simply named Bolko I.

The castle was then passed on from one ruler to the next after Bolko II passed away and then his wife’s death a few years later. Seeing as they had no children, Bohemia’s King Wenceslaus II took over the castle.

In the year 1945, the Red Army took control of the castle upon which most of the castle’s treasures were destroyed.

The cost to visit Ksiaz in Silesia – Poland depends on which routes you are going to take. Maximilian’s Route costs about 20.00 PLN while the Mysteries of the Second World War Route 22.00 PLN.

Visiting the Tower costs about 10.00 PLN. These costs are for guided tours.

For individual visits, touring the castle and the terraces cost about 15.00 PLN, Terraces only cost about 8.00 PLN while for the castle, terraces and the stables, fees are at 18.00 PLN.

Ksiaz in Silesia – Poland is open everyday except on All Saint’s Day on November 1, Christmas Day, Sylvester Day which is New Year’s Eve and also New Year’s Day.