Kungsleden – Sweden also known as “King of Trails” is a popular hiking trail in the country that runs through the remote wilderness of Lappland in Western Europe.

Kungsleden – Sweden is located between the village of Abisko on its northern side and the locality of Hemavan on its southern side.

The train rides will take around twenty-four hours.

As you hike on the trails of Kungsleden – Sweden, you will see beautiful landscapes, forests of birch trees, rivers and glaciers. The trail runs for around two hundred and seventy-five kilometers and passes through 4 different national parks and reserves.

If you have one month to spare, you can hike the entire length of the trail. For the most part however, hikers are usually already content with a week’s worth of hiking down the trail.

Along the way, you will see Sweden’s highest mountain peak which is Kebnekaise. If you wish to stop for awhile, there is a lodge by the mountain where you can stay.

As for the aforementioned national parks, one such park is the Sarek National Park which is one of Lappland’s World Heritage Sites. 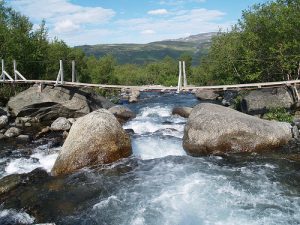 Kungsleden – Sweden was established in the latter part of the nineteenth century by the STF or the Svenska Turistföreningen. This was done to allow more hikers to enjoy the wilderness of Lappland.

The trail is well-preserved by the STF. With most of the trail being flat, it is not considered as a very difficult trail to trek on although experience in the wild may be required.

Kungsleden – Sweden is divided into four sections, with each section ideal for a week’s worth of hiking. Of all these four sections, the most popular trails are those on Kebnekaise and Abisko.

There are huts provided along the way, built by the STF to allow hikers to rest for awhile should they feel the need to do so.

On the other hand, if you do not wish to spend a night in one of the huts but would like instead to use them for a couple of hours; you can do so for a small fee, around 40 SEK.

The best time to hike on Kungsleden – Sweden is between the months of June and September when the weather is more favorable.