Lahore – Pakistan is the second biggest city in the country and is the capital city of the Province of Punjab. It is considered as the cultural capital of Pakistan as in the course of its history, it was the hub of cultural heritage for various peoples.

Lahore – Pakistan is located in northeast of Punjab; bordered on its north and western sides by the Sheikhupura District; on its eastern side by Wagah; and on its southern side by the Kasur District.

In addition, on its northern side flows the Ravi River.

Lahore has an international airport, the Allama Iqbal International Airport which is roughly around twenty to thirty minutes off Lahore’s city center. From the airport, you can get to the city centre, your accommodations or your first stop in the city via a taxi ride.

You can also reach Lahore via a train ride. There are several train routes that pass through various points in Pakistan going to Lahore.

There is plenty to see around Lahore – Pakistan. Within the Wall City, you can visit Lahore Fort, a UNESCO World Heritage Site. Within the fort is a museum that has exhibits on the Sikh Period from the eighteenth century. 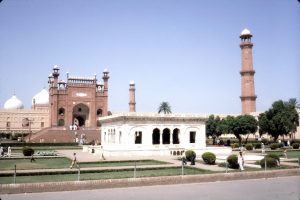 There are also the Badshahi Mosque and the Inner City within Wall City.

Within the Inner City, there are several gates of historical importance.

These 13 gates include the Raushnai Gate also known as the “Gate of Light,” the Yakki Gate whose name was taken from the name of a martyred saint who died defending the city; and the Delhi Gate which is called as such because it opens to a highway that leads from Lahore to Delhi.

There are likewise several parks in Lahore – Pakistan, a man-made forest, a shrine to the city’s patron saint and the Shalimar Gardens which is likewise a UNESCO World Heritage Site.

Story goes that Lahore was established some four thousand years ago by the Son of Rama who is the hero in the Ramayana; a famous Hindu epic.

Because of its location on the major trade routes south of Asia, Lahore has fallen to several foreign invasions. For fourteen years, Lahore – Pakistan was the capital of Akbar, starting from the year 1584 up to 1598.

In the year 1849, the British took hold of Lahore and during this time, they built several structures in the city depicting Gothic-Mughal architectural designs.

Lahore gained its independence in the year 1947.

Some of the attractions in Lahore – Pakistan require an entry fee and this varies depending on which particular sight you will be visiting.

For affordable accommodations, you can find several excellent hotels and hostels around the city. Cost of these range from 200 rupees up to 350 rupees per night, per room.

Mid-range accommodations generally cost USD 45 to USD 70 or its equivalent in Pakistan Rupee; while more luxurious accommodations USD 93 up to USD 184 per night, per room.

To enter any of the mosques in Lahore, women are required to wear a dupatta; a type of scarf worn by local women to cover their heads and chests.