Lake Inari in Finland is one of the biggest lakes in the country. The many features of the lake has made it one of the most interesting places you can visit in Finland. 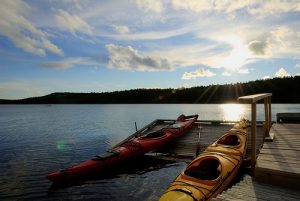 The lake can be found at the northern section of Lapland. It is at the north of the Arctic Circle. It is the biggest lake at Sapmi.

The lake covers an area 1,040 square kilometers. Different types of fish are found in the lake. The lake is known for its many different ramifications and indentations. The lake is also known for its numerous islands. Estimates vary, but the number typically given is 3,000.

One of the best known islands is Hautuumaasaari. The name means “graveyard”. During ancient times, the island was used as a cemetery by the Sami people. Another interesting island at Lake Inari in Finland is Ukonkivi. This was a place of sacrifice used by the ancient people.

The lake empties to the north heading through Paatsjoki. This is at the Varangerfjord mouth at the Barents Sea bay.

To this day, archaeologists and researchers are still trying to determine when the Finno-Ugric tribes first appeared. What is known is that the Swedish missionaries had begun to Christianize Finland by the 1150s. Finland would become a part of Sweden until the 19th century. In 1809, Finland came under Russian rule. It became an autonomous grand duchy.

World War I and the 1917 revolution in Russia gave Finland the chance to declare independence. The country was occupied by the Soviet Union in WWII.

After the war, Finland remained neutral and maintained this stance during the Cold War. This allowed Finland to have close ties with the USSR and the West. Following the collapse of the Soviet Union, Finland joined the European Union. Today, it is one of the most vibrant economies in the world.

Airfare tickets from the US to Finland will cost about 1000 USD. A tour of the lake is usually provided by travel tour operators. These trips will allow you to visit other sites. The cost will vary, so you should check online.

The lake shores are rugged and rocky. There are birch, pine and spruce forests all around. They appear in arctic and dwarf forms.

Lake Inari in Finland is 120 meters above sea level. The regulation is at the Kaitakoski power plant. This is at Russia. Before you visit, remember that freezing takes place November to June.