Ljubljana – Slovenia is the capital city of the country and its largest as well. With its parks, historical sights, architectural landmarks and numerous festivities, Ljubljana welcomes thousands of tourists from all over the world each year.

Ljubljana – Slovenia is located in the central parts of the country, along the Ljubljana Basin.

International flights come in via the Jože Pu?nik Airport located twenty-seven kilometers north of the city. From the airport, you can reach the city center via bus or minibus; taxi; or care hire service.

Bus rides will take about fifty minutes and will cost about €4 to €5 while taxis and car hire services will of course take a shorter time to reach the city center. Taxi fares start at €10 and can reach up to €40.

You can also reach Ljubljana – Slovenia via bus services that have routes going to and from several cities of different countries, i.e. Italy via Trieste or Venice; Germany via Munich and Frankfurt; and Denmark via Copenhagen; to name a few.

Visit the Old Town situated between Castle Hill and the Ljubljana River. Here, you can see beautiful structures dating as far back as the medieval times and relax in one of the coffee shops and restaurants that are now located in these buildings.

If you wish to get a panoramic view of the city, head off to Ljubljana Castle and climbs its towers. You can also watch a 3 Dimensional movie about the town’s history, visit the courtyard and chapel. 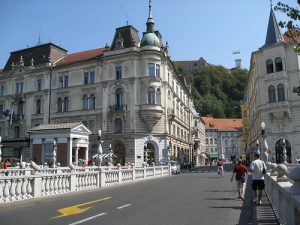 If you are traveling with children, you can take them to the city zoo which is home to more than one hundred different animals.

Museums are of course worth a visit, too; and within the city you can find several museums that display various exhibits on history, arts and culture. Among these are the National Museum of Contemporary History, Museum of Modern Art, and Slovenian Museum of National History.

The name of the city and the river used to be “Laibach” back in the Middle Ages; derived from an old German word that translates to “standing water causing floods.”

The city’s official symbol is the Ljubljana Dragon whose origins are quite unclear. Legends have it that a monster was struck down by Jason of Jason and the Argonauts. The monster was found between the cities known today as Ljubljana and Vrhnika.

Another story tells that the dragon was the symbol of Christianity overcoming Pagan Worship during the time of St. George, the patron of the city’s chapel found in the Ljubljana Castle.

Accommodations in and around Ljubljana – Slovenia are at €12 to €60 for those looking for budget rooms; mid-range is from €15 to €90 while luxurious accommodations range from €100 to €150.

For dining out in Ljubljana – Slovenia, budget restaurants offer meals at €2 to €4 per person; mid-range is from €5 to €13 and more expensive restaurants range from €20 to €40 per person.

The cost to climb the tower of Ljubljana Castle is €5 for adults and €3.50 for senior citizens and students. Entry to museums ranges from €1 to €3.

If you are visiting Ljubljana – Slovenia between the months of July and August, the city holds the Ljubljana Summer Festival where you can watch musical performances by local and international artists.