The tourist attractions at Mahasthangarh is one of the highlights of any trip to Bangladesh. It is the oldest archaeological site that has been discovered in the country. 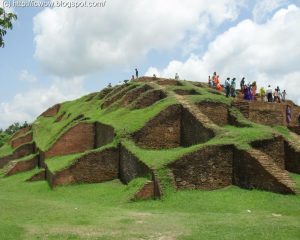 The site is in North Bengal. It is at the Bogra District in Shibganj thana. The ruins are in the village of Mahasthan.

The site is divided into several sections. A citadel fortifies the main site. Inside the citadel is the Bairagir Bhita. Some of the artifacts unearthed here are the sculptured sand stone pillars and temple ruins. These have been dated from the 4th to the 11th century.

At the Khodarpathar Bhita, stone carvings with Buddhas have been discovered. At the Parasuramer Prasad are the remains from the occupation periods from 800 – 1800 AD. One of the major tourist attractions at Mahasthangarh is Mankalir Dhap. It was where the remains of a 15-domed mosque was found. Bronze Garuda and bronze Ganesha and terracotta plaques have also been discovered in the area.

Another place worth visiting is the Gokul Medh. It is known for the terraced podium with over one hundred blind cells. This has been dated to the 6th century. The Khulnar Dhap is where the remains of a another temple have been uncovered.

The site used to be the site of the ancient kingdom of Pundravardhana. The history of the kingdom goes back to 1280 BC. This is one of the kingdoms that made up of Eastern India. The name of the place has been mentioned numerous times in the Mahabharata.

Based on the ancient texts, a Vasudeva presided over the land. A limestone was unearthed with half a dozen lines in Brahmi script. This was uncovered in 1931 and dates back to 300 BC. From 300 BC to 200 BC, the area was part of the Mauryan Empire. Numerous excavations have since been done in the area.

The admission to the museum nearby is Tk 10 for adults and Tk 5 for children.

The area outside the citadel also has many ruins and sites. The Govinda Bhita is where the ruins of temples from the 3rd to the 15th centuries have been found. This is located opposite of the museum and to the northeast of the citadel.

A couple of other tourist attractions at Mahasthangarh are Narapatir Dhap and Totaram Panditer Dhap. Both are situated at the Basu Vihara village. This is six kim northwest of the citadel.