Majlis Ghorfat Um-al-Sheef is one of the most notable tourist spots in Dubai. The summer home of Sheik Rashid bin Saeed al-Maktoum, it has historical significance as well. 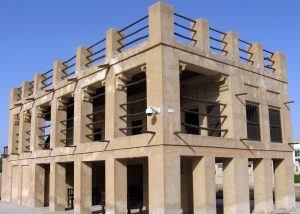 The summer house is in Jumeirah, Dubai. The address is 17 St, Jumeirah 3 south of Jumeirah Rd. It can be found at a side street at the end of Jumeirah Road.

If you are having a hard time finding it, just look for the BinSina Pharmacy and HSBC Bank at the corner of Jumeirah Road and 17 St. Turn down 17 St for fifty meters. You will see the house on your left.

The house is composed of gypsum and coral rock. The house also has an irrigation system and a garden. The complex had suffered damage through the years but has been restored. Built in 1955, it has a wind tower and palm frond roof. There is a meeting room (majlis) upstairs. It is furbished with food platters, pottery and a coffee pot.

The Majlis Ghorfat Um-al-Sheef also has rugs and cushions. The cushions are set around the edges. Many of the household objects are at the floor and walls. Some of the household items are the oil lamps, rifles, a clock and radio.

It has been designed to look as it did in Sheikh Rashid’s time. Also worthy of mention are the windows and doors which are made of solid teak. The scenery is breathtaking as everything is enveloped in an Arabian garden with date palms.

The oldest records are from the 7th century, stating UAE’s oldest inhabitants were seafarers. The Carmathians took control of Mecca. The end of the sheikdom resulted in the appearance of pirates. In 1853, Britain set up a truce among the warring factions.

The Pirate Coast was replaced by the Trucial Coast. In 1971, the UK left the Persian Gulf. The nine states of the Trucial Coast combined to make a federation known as the UAE, the United Arab Emirates. Oman and Bahrain did not join and became independent. In 1994, the country signed a military defense agreement with the US.

The entrance fee is Dh1.

There are many spectacular buildings and architectural marvels in Dubai today. But this modest little house serves as a reminder of simpler times.