The Masjid Sultan in Kampong Glam or the Sultan Mosque is the biggest one in Singapore. As such, it is one of the most famous religious buildings in the country.

The mosque is located at 3 Muscat Street at the Kampong Glam district. This is to the city center’s east. It is close to the Arab Quarter ethnic street.

Its most prominent features are the golden domes. Intricate decorations and ornaments are on the entrance to the mosque. There is also a tower on the left side of the structure. Due to its popularly, you will see many people around the building. While the dome is golden, the rest of the structure is more brick like.

The temple was built by Sultan Hussain Shah of Johore. The mosque was built next to his residence in 1824. It was fitted with a roof shaped like a pyramid. The old edifice was removed to make way for the new building. Numerous additions were added. But by 1924, the community had become too large and a new mosque had to be constructed. 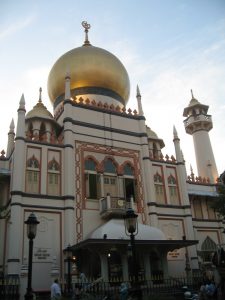 In 1928, after four years of building, the new mosque was complete since that time, the temple not been changed much. During the 1960s, a few repair works were conducted. In 1993, an annex was added to the structure. The edifice is currently owned by Majlis Ugama Islam Singapura (MUIS).

The starting cost of a tour in Kampong Glam is $23. The mosque itself has free admission.

Aside from the temple, the district is also known for its many restaurants and shops. Not far off is a bazaar where you can buy shirts and other merchandise. The restaurants nearby sell different kinds of food and beverages.

Most tour operators will include visits to other sites in the area besides the mosque. Before you pick one, check the total cost. The figure given above is only for starting expenses.

When visiting the Masjid Sultan in Kampong Glam, etiquette must be followed closely. Aside from the information provided here, ask your guide if there are any new regulations that have to be adhered to.