The Minar-e-Pakistan is one of the most popular attractions in Lahore, Pakistan. While the city is famous for its many cultural landmarks, this minaret is one that never fails to draw attention and visitors. 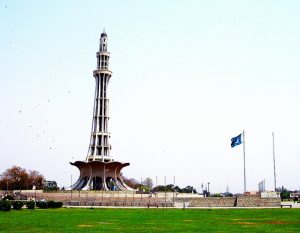 The minaret is at the Iqbal Park in Lahore.

The tower rises eight meters above the surface. The tower reaches a height of 62 meters over the base. This makes the structure rise nearly 72 meters above the ground. The base has flower-like petals unfolding. These are 9 meters tall. The diameter is 320 feet (97.5 meters).

The platform looks like a five pointed star and surrounds two pools. There is a spiral staircase with 162 steps. Visitors who ascend the steps or use the elevator can see a sweeping view of the city.

The area surrounding the monument is filled with parks and a man made lake. There are also fountains. The minaret dome is constructed of stainless steel. This is decorated with glass pieces.

The Minar-e-Pakistan was created in memory of the Pakistan Resolution. It was built by Usman Khan and Nasreddin Murat-Khan, both engineer/architects. With approval by the President, the tower was constructed by Mian Abdul Khaliq and Company. The foundation stone was set on March 23, 1960. The structure was finished on October 31 1968. The expenses reached 500,000 Rs.

The tower is composed of marble, stones and reinforced concrete. The rostrum is constructed of patterned tiles. It fronts the Badshahi Mosque. The base is composed of four platforms.

The first platform is built with uncut Taxila stones. The second is made up of hammer-dressed stone. Chiseled stones make up the third platform of the structure.

Cost of food in Lahore varies from low budget to splurge. The mid range meals are around 3 to 10 USD. Air-conditioned buses have different fares. The cost for long distance travel can range from 180 Rs to over 800 Rs.

In spite of the huge number of visitors to the site, the Minar-e-Pakistan has managed to remain in good shape. It has not been affected much by air pollution. However, there are currently plans by the government to refurbish the structure.