Going aboard the Mocanita train in Romania is like taking a journey back in time. Although it isn’t one of Europe’s best known tourist hotspots, it is truly a site worth visiting. 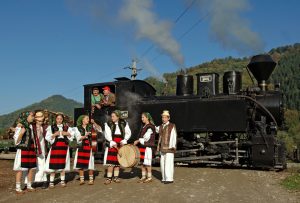 The railway starting point is the town of Viseu de Sus in Maramures. Maramures is a region found in the northwestern part of the country. The train moves along the Vaser Valley.

The journey will take you to the Maramures Mountains. Those riding the train will see stunning canyons and dense forests. The forests and cliffs alternate with views of mineral water springs and lush clearings.

Tourists riding the train can stay up to the valley’s end. The railway length is 43 km. The train passes by the many attractive homes in Viseu de Sus. After 7 km, the train makes its way through the forests. Passengers will see precipitous cliffs.

The trip includes going through dark tunnels in the mountains. The sounds of the rivers can be heard over the train. Those on the train will also feel the sensation of going and down some slopes.

The Mocanita train in Romania was built from 1930 to 1932. Its purpose was to carry wood. To this day, the train is utilized for that purpose. However, it is also becoming a tourist attraction. In spite of its age, the railway is still safe to use. Due to the location however, cell phone signals are virtually nonexistent.

The railway was designed with several stops and is still used for dropping off logs. As the train goes up, empty wagons are dropped. They are picked again and packed with logs. Owing to the long journey, several fuel stops are made along the way.

Besides the train, Viseu de Sus is also home to a museum dedicated to the area’s history. The office of the Maramures Mountains Natural Park is also there. A tourism office for the train is also in the area.

The Mocanita train in Romania departure dates varies depending on the season. The rates may also vary during special occasions (i.e., Christmas, New Year etc).