The Moderna Museet in Stockholm is a museum run by the Swedish government. Owing to its vast international art collection, the place draws a lot of visitors.

The edifice is situated on Skeppsholmen Island in the center of Stockholm. To get there, take a walk by the national museum and the Grand Hotel. Go across the bridge and to Skeppsholmen. Follow the signs that will take you to the museum. The journey should take no more than 20 minutes.

The Moderna Museet in Stockholm focuses on Swedish and international art. The emphasis in both instances is in modern artwork. There is a Tatlin Tower model displayed. There are also pieces by Salvador Dalí and Picasso.

Artists like Robert Rauschenberg, Henri Matisse, Niki de Saint Phalle, Louise Bourgeois and Marcel Duchamp are also represented. One of the most popular galleries is the Pontus Hulten Study Gallery, containing the art collection of its former director. 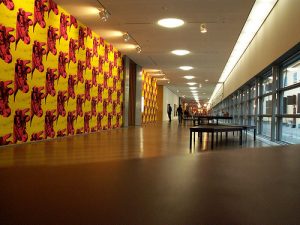 The museum opened its doors in 1958, and Pontus Hulten was its first director. Through the years, its collections would expand. From 1994 to 1998, the museum was temporarily relocated as the Skeppsholmen edifice was being rebuilt.

Works of modern artists are also represented. In 2005, its former director Pontus Hulten bestowed 800 art pieces to the museum. He also donated his library and archive. Besides the permanent galleries on display, there are also temporary exhibits on display. These shows vary in style and subject matter.

There is no entrance fee. However, some of the temporary exhibitions may impose some charges.

There is also a bookstore in the museum. Souvenirs and gifts can be purchased there. There is also a restaurant and cafe nearby. Aside from the drinks, it offers a lovely view of the waters.
Skeppsholmen Island is also the location for many other museums. You should be able to see a few of these as you walk along. \

In 1993, two artworks by Georges Braque and six by Pablo Picasso were stolen from the building. The thieves entered the building during the evening. Following this incident, security in the museum was tightened considerably. The paintings stolen have a combined value of 40 million Pounds.

The Moderna Museet in Stockholm also plays host to different events. In 2005, it was used to stage the Onedotzero festival. The event served to introduce younger people to the museum. ?