Monte Perdido Huesca (the Lost Mountain) is one of the most majestic mountains in Europe. The mountain itself is very striking, but there are many more attractions around it. 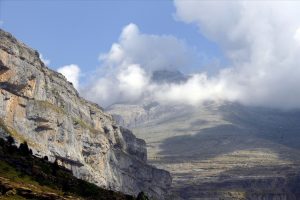 The summit is at the province of Huesca in Aragon, Spain. The mountain makes up a part of the Ordesa y Monte Perdido National Park. To reach the mountain, one starts at Torla village in Aragon. The ascent is at Cirque de Soaso heading to the Refuge of Goriz. From there you can proceed to the summit.

Apart from the impressive peaks of Monte Perdido Huesca, there are 1500 species of flowers in the park. There are also more than 200 species of mammals and birds. One of the most notable is the Lammergeier (Bearded Vulture). This bird has a 3 meter wingspan. The area around the Pyrenees is awe inspiring. There are scenic lakes, waterfalls and unique valleys.

There are several activities you can do in and around the mountain. These include traditional mountain climbing, skiing and hiking. The countryside is also a great place to visit.

During the winter, the average temperature is 2 C (28.4 Fahrenheit). Other sections in the range differ too. The western region has some glaciers. These are also found in the central area. These glaciers are absent in the eastern area. This is due to lack of falling snow.

There are many types of tour packages to Spain available. The price will start at 1000+ USD and go up from there. Many will include trips to the mountain, but their prices will vary.

The Gavarnie Falls in the Monte Perdido Huesca is a waterfall. It has a couple of tiers and a total drop of 1384 feet (422 meters).