The Monument des Martyrs is one of the most significant landmarks in Algeria. It is nothing less than a symbol of the country’s fight for independence. 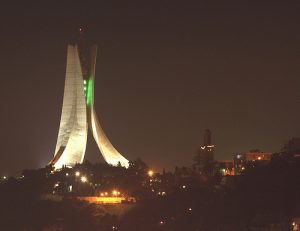 The monument is located in Algiers, the country’s capital. As the capital, majority of the roads and highways lead to the city. You can reach the place via a taxi, bus or car.

The three statues symbolize each stage of the country’s struggle. Whether it is the daytime or night, the structure retains its elegance.

The Algerian War (1954–62) was the country’s fight for independence against French occupation. As the Algerian nationalist movement grew, the French started using military force. The French also forcibly relocated the indigenous population. It also launched a war against the Front de Liberation Nationale (FLN).

In spite of the French efforts, the FLN continued engaging in guerrilla warfare. During the Battle of Algiers of 1956–7, the French employed torture against the FLN. This only bolstered support for the FLN among ordinary citizens and abroad.

In May 1958, the Fourth Republic collapsed. France decided to call General Charles de Gaulle to head Algeria. Contrary to what the French expected, de Gaulle pushed for the Algerians’ right on 16 September 1959.

In April 1961, de Gaulle survived a coup attempt by some troops who believed he was betraying France. A ceasefire was declared on 19 March 1962. Algerian independence was declared shortly thereafter.It was for this reason that the Monument des Martyrs was built.

You will rarely find a taxi with a meter, so the price has to be negotiated first. Negotiate the price before you board one. Usually though, the cost will not exceed 600 dinars ($4). Buses are cheaper; the fare is about 25 dinars. It will be higher if you are coming from farther away.

The project was funded by Marian Konieczny, the Polish sculptor. Even if you are a first time visitor to the city, it is impossible to miss. You can also take the train via the Algiers Central Train Station. The station services other cities like Constantine, Annaba and Oran.

The Monument des Martyrs is not just a site for the history buff. It is one of the simplest ways to appreciate the courage and fortitude of the Algerian people.