Moscow Kremlin or simple The Kremlin cannot be missed for its humongous size. It is a top tourist spot that anyone traveling to Moscow, Russia should include in his itinerary. 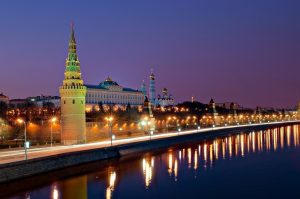 The Kremlin is located at the heart of Russia’s capital city of Moscow. It is overlooking four important destinations in three directions – Red Square and St. Basil’s Cathedral (east), Alexander Garden (west), and Moskva River (south).

Since it is in downtown Moscow, it is almost fuss-free to get to The Kremlin. Although you can access this site by foot, you might want to take the popular Metro system because distances can be huge in between the many tourist attractions.

The Kremlin houses the official residence of the Russian Federation’s president. Among other things, it also has towers, palaces, and cathedrals. All of which make for spectacular sights. It also boasts of a Diamond collection in the armory.

Tourists who come over usually take a visit to one or two churches and enjoy the rest via their handsome gardens. That way, they will have enough time to explore the rest of the gigantic site.

You may check out a ballet in the Conference Center for some matinee performances or just go around the palaces and marvel about their splendid architecture.

The Kremlin’s site has been inhabited as early as the 2nd Century BC. It originated from a fortified structure on the part of the Borovitsky Hill where the Neglinnaya River flowed through the Moskva River. It has been known as the grad of Moscow until the 14th Century when the word “kremlin” first came out. The oldest stone structures within the complex were built during the 14th Century. Between then and now, The Kremlin etched a special place in Russian history.

There are three scheduled tours to The Kremlin. One at 10 o’ clock in the morning, another at half past 2 in the afternoon, and the last at half past 4. You must be able to avail of your tickets 30 minutes to 1 hour before the tour starts. Large bags are not permitted inside the complex. You need to leave yours at the luggage office for a fee of 60 Russian Rubles or a little over 2 US Dollars.