The Mourne Mountains in County Down – Ireland has been a source of inspiration to many people. We all know the immortal classic The Lion, The Witch, and The Wardrobe by C. S. Lewis but it should also be made known that Lewis found inspiration to write the classic work because of the Mourne Mountains. Songwriter Percy French was also moved by the said mountain range and wrote his never to be forgotten song Mountains o’Mourne.

Mourne Mountains in County Down – Ireland is also known as Mournes or Beanna Boirche in Irish, which means Boirche’s hills. It is a truly stunning mountain range located in the south-eastern end of Northern Ireland. This series of granite mountains is one of the more popular mountains in the country.

The Mourne Mountains are located in Newry, County Down in Northern Ireland. You can call the local tourism council at 028-3031-3170 or fax them at 028-3031-3172. The address of the Newry Tourist Information Centre is Bagenal’s Castle, Castle Street, Newry, Co. Down, Northern Ireland, BT34 2DA. You can also email them at newrytic@newryandmourne.gov.uk. Taking a weekend trip and engaging in the various activities 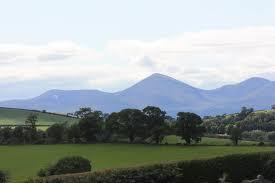 up in the Mournes will cost one traveler an average of 70 pounds.

The mountains and the surrounding area are outstandingly beautiful natural sceneries. As such, the place usually attracts a lot of visitors and tourists annually. The name Mourne comes from the name of one of the Gaelic clans that goes by the name Múghdorna. The said mountains are owned and maintained by the National Trust for Places of Historic Interest or Natural Beauty, a conservation organization operating in Northern Ireland as well as in Wales and England.

The Mourne Mountains in County Down – Ireland is a popular destination for rock climbers, hill walkers, cyclists, and other tourists. One of the sites that draw in a lot of these visitors is the Mourne Wall, one of the really popular sites in the said mountain range. This wall was constructed to mark the boundaries of certain properties. This dry stone wall goes over a total of 15 summits. The work on the Mourne Wall was initiated in 1904 but was only completed in 1922.

Each of the mountains here has been designated with names. They include Slieve Donard, Buzzard’s Roost, Pigeon Rock, Slieve Muck, Brandy Pad, Pollaphuca, and the Devil’s Coach Road among many others. Each of these mountains offers stunning views and panoramic scenes that often capture the imagination of its visitors. The wildlife and vegetation that can be found here add to the already magnificent splendor.