If you are looking for the most fascinating attraction in Kuwait, you should not look any farther than the Musical Fountain in Al Murqab. 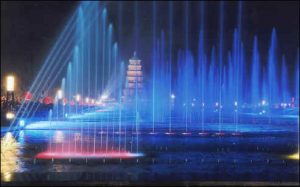 The Musical Fountain is conveniently situated on the 1st Ring Road in Kuwait City, the country’s capital city. It is quite convenient to get to because available transport options are dime-a-dozen. But that is not the only good thing about visiting the Musical Fountain. Since it is right at the heart of the city, it would not be difficult for you to find other tourist spots nearby. It can be part of a mesmerizing journey through the culture and tradition of the country.

The Musical Fountain is a stunning and glittering show that everybody would definitely love. It is characterized by water fountains dancing to the colorful Kuwaiti tunes and bright, changing lights. It is truly one captivating sight that is worth a trip.

The Musical Fountain is huge. It is placed in no less than three pools with over 200 fountains spitting water in such a fascinating fashion. Aside from seeing the sight of the spectacular fountains, you also have an option of lounging around an exciting cafeteria, which sits nearby. There are also available games suitable for kids of all ages. The Musical Fountain is also quite near an ice-skating rink in Shamiah area.

The fourth largest fountain in the world, Kuwait’s Musical Fountain was badly destroyed when the Iraqis occupied the country. It was later on restored to be the country’s most impressive attraction. In fact, it drives quite a sizable amount of tourists, especially during summer.

Seeing the Musical Fountain in Al Murqab is mostly free. You will be asked to pay for a minimal cost, however, if you time your visit during festivals and national holidays. That piece of fact makes a trip to see the fantastic show of lights, water fountains, and sounds even more worthwhile. Imagine, you can avail of this wonderful sight for no cost at all? That’s unless, of course, you would like to have a bite and a drink at the nearby cafeteria. Trying out at the ice-skating rink also comes with an added cost.