Naqsh-e Rostam in Shiraz is one of the most significant archaeological sites in Iran. It is known primarily for the Achaemenid tombs and other ancient artifacts. 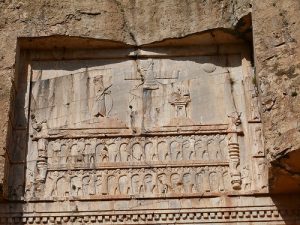 The archaeological site can be found in the Province of Fars. It is 12 km to the northwest of Persepolis. You can reach the place by taxi.

There are four tombs of the Achaemenid kings set on the rock face. These burial chambers are called crosses owing to the facade shape. In the middle of the cross is the entryway. This will take you to the chamber where the sarcophagus is located.

You will also see a sign on one of the tombs stating it is the resting place of Darius I the Great. The other burial chambers are said to be those of Darius II and Artaxerxes I.

The site also has several rock reliefs of many different kings. Some of the reliefs are those of Ardashir I, Shapur I and Bahram II. The Shapur I relief is best known as it shows him triumphant over Roman emperors. There is another version of it at Bishapur.

Other reliefs are those of Narseh and of Hormizd II. In the Narseh relief, the king is seen getting a ring from a woman. It is assumed she is the goddess Aredvi Sura Anahita.

If you are with a tour operator, you should be able to reach the site without difficulty. If not, a taxi can take you there. Most of the time the taxi will not have a meter or it is “broken”. In that case, negotiate for the fare in advance.

Other interesting sites in Shiraz include the Hafez Tomb, the greatest poet of Persia in the 14th century. The Arg of Karim Khan was a prison turned exhibit, while the Afif abad Garden is an elegant house and garden.

After visiting Naqsh-e Rostam in Shiraz, you can check out Narangestan Qavam, the Delgosha Garden and the Nasir al-Mulk mosques.