Taichung comes in third as the largest city in the country; and while it has various tourist attractions to offer; the most popular by far is the National Museum of Natural Science in Taichung – Taiwan.

This museum is visited by both locals and tourists year-round. 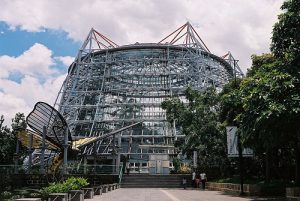 The National Museum of Natural Science in Taichung – Taiwan is located at One Guancin Road, right in the downtown area of the city.

Arriving in Taichung is mostly done via a High Speed Rail train from Taipei or Kaohsiung as there are not international airports in the city.

From the HSR Station, you can take a shuttle bus going to the national museum.

The National Museum of Natural Science in Taichung – Taiwan is a huge museum complex that houses several different exhibits. The exhibits are generally categorized into two: permanent and temporary.

Permanent exhibits on the other hand, are likewise categorized; and these include the following: Science Center, tackling modern science subjects such as astronomy, physics, electronics and chemistry; and Life Science, tackling life, planet Earth, evolution and the environment.

Human Cultures meanwhile exhibits the history of the Chinese people as well as their influence on world culture.

There is also the Global Environment Hall where you can learn more about the 7 ecosystems in the world and the country’s biodiversity. There is a 3D theater within this hall where you can watch films on the environment, among other things.

Work on the National Museum of Natural Science in Taichung – Taiwan started some time in 1981; extending up to 1985 to complete its first phase. The following year, on the 1st of January, it was officially opened to the public.

The Science Center and the Space IMAX Theater were the first to be opened. Two years later, the Life Science Exhibit was opened some time in August of 1988.

In 1993, two other halls were opened: the Human Cultures Hall and the Global Environment Hall.

The museum enjoys some three million guests annually, more than half of whom are students.

The cost to visit the National Museum of Natural Science in Taichung – Taiwan is as follows:

Free entry to the galleries is offered on Wednesdays, between 9 and 10 in the morning. Visitors 65 years of age and older get free admission to the galleries, excluding the Botanical Garden.