The National Museum of Vietnamese History in Hanoi – Vietnam is located in the country’s capital. The building itself is a fine specimen of the architecture of its time preserved through the years. Since the museum is located in the nation’s capital, finding the place and traveling to it won’t be that hard.

There are a lot of travel options when trying to get to Hanoi and eventually to the National Museum of Vietnamese History. The most common and fastest way to get there is by plane. Most of the visitors and other travelers get into the country’s capital via the Noi Bai International Airport, which is located around 35 kilometers from the city.

Traveling from the airport and into the city will also leave guests with several options. The most favored one, of course, would be to travel via taxi. If you go for this option, be prepared to pay a fare that would range from $15 to $30. A bit of a cheaper travel alternative would be shuttle buses and public buses. 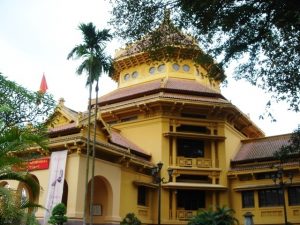 If you’re coming from Nanning, China then you may opt to travel by train and arrive at the Hanoi train station. Traveling around the city and getting to the museum will usually require travel by taxi or bus. If you’re used to the crazy traffic in Vietnam then you can rent a bike or car and drive your way around.

The National Museum of Vietnamese History in Hanoi – Vietnam is a fine sample of Indochinese architecture. At the entrance, visitors will be greeted by a remarkable rotunda, which is a mark of the architectural style when the building was erected. Not only is the building the remarkable thing to see here. Its contents are just as fascinating as the building that houses them.

The collections at the ground display the history of the country until the 15th century. The relics found in this museum include jewelry, axe heads, tools, pottery shards, and household items among many others. There are also Champa pieces on the second floor along with a collection of artifacts that date from the 15th to 20th century. Guided tours in this museum are available upon visitor’s request.

History of the National Museum of Vietnamese History in Hanoi – Vietnam

The building that houses the museum and all its collections was once the residence of the French governor general and was the French consulate until 1910. The entire facility was closed for renovation by the 1930s which lasted for about seven years. Ownership and control over the facility and the contents of the museum were transferred to the government of Vietnam in 1958.

The National Museum of Vietnamese History in Hanoi – Vietnam is open from 8 am to 11:30 am and from 1:30 pm to 4:30 pm. An admission fee of 15,000 Vietnam Dong or roughly 0.75 USD is payable upon entry. You get to pay the same amount in case you want to take pictures and double that if you want to take a video.