The Nistru River in Chisinau is known by many names. It is called Dnestr in Russia and Nester in Yiddish. Although recognized as a part of Moldova, it actually flows through many countries.

The rising of the river starts at Ukraine close to Drohobych city. This is near the Polish border. As the river flows to the Black Sea, it will reach the border of Moldova and Ukraine. The river goes into Moldova for 247 mi (398 kilometers). The river serves to break the country from Transnistria. From the Ukraine-Moldova border, it goes back to Ukraine and to the Black Sea.

The half of the Nistru River in Chisinau is flat and low, while the western bank is filled with hills. The river spans a length of 1,362 km (846 mi). Standing across the river you will see the lush greens around the surrounding plain. 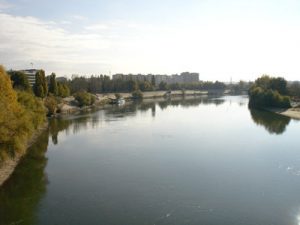 The clear blue waters clearly reflect the white clouds and azure sky over it. As you move along, the scenery changes and the cityscape appears. Going by the river is a great way to see Moldova’s natural and man made wonders.

The river was the focal point of the Cucuteni-Trypillian culture that lived c. 5,000 to 2,600 BC. Archeological evidence shows there were settlements in the area dating from the Neolithic Era. The area was also cited by historians as one of Europe’s major rivers.

Both Ptolemy and Pliny mentioned the river in their works. During World War II, Russian troops battled the Germans and Romanians along the river’s western bank. After the Moldovan declaration of independence in 1991, the portion east of the river refused to join and called itself Transnistria.

Flights to Moldova are cheapest in Eastern European countries. The most affordable are those at Kiev, Istanbul and Moscow. Even more affordable are trains ($40 or so). There are also buses to and from Moldova that you can use.

The river has numerous tributaries. These include the Bîc River, Ikel River, Raut River on the east border. To the west are the Seret River, Dzhuryn River, Koropets River and Zolota Lypa River.

The easiest way to see the Nistru River in Chisinau is by taking a leisurely stroll around the city. As you walk, you’ll be able to see the other attractions close by, including the Parcul Valea Morilor Park.