Nossi Bé – Madagascar is the largest island in the country and is considered as the most popular beach destination in the island nation. Apart from its beaches, this island also has a nature reserve which is known as the Lokobe Reserve.

Nossi Bé – Madagascar is situated about 8 kilometers off the northwestern coast of the country. It is within Antsiranana Province.

Nossi Bé – Madagascar is served by its own airport, the Fascene Airport, which accommodates flights from several countries in Europe.

You can also reach the island via a boat ride from Ankify, a peninsula within the same province as Nossi Bé.

Nossi Bé – Madagascar is set against a backdrop of majestic mountains and hills; bays, beaches and volcanic lakes. This being said, exploring the island on foot is ideal as you get to enjoy these beautiful scenery at your own pace.

As you walk around the villages, you will also see coffee plantations, cacao plantations as well as sugar cane and vanilla plantations. With all of these different plantations, you will get a whiff of different aromas which actually add to the idyllic ambience of the island.

Add to these, the numerous Ylang-Ylang trees around the island and you will surely feel as if you’ve been transported to another world.

The white, sandy beaches are perfect for swimming, snorkeling and diving. The island has beautiful coral reefs that you can check out.

You can also check out the Lokobe Reserve where you will see black lemurs and the Nossi Bé Panther Chameleon, among many other animals.

Going for a ride on a mountain bike, fishing and trips to other nearby islands are also some of the popular activities travelers look forward to when visiting this island. 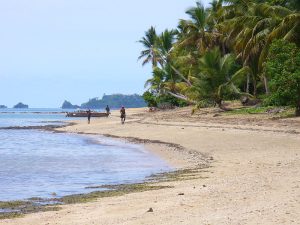 Nossi Bé – Madagascar translates to “big island.” Before it got its current name, the island was known as Assada; specifically during the 17th Century, in the early years of the island.

It covers an estimated area of 312 square kilometers which makes it as the largest island in Madagascar.

It is believed that the early residents of the island were the peoples of Antankarana and Zafinofotsy.

In the year 1837, King Radama I gained power over the island with the defeat of Boina’s Queen Tsiomeko and her army.

Today, the island is a major player in the country’s tourism industry; experiencing a good number of visitors from all over the world year-round.

Accommodations around Nossi Bé – Madagascar vary depending on your preference. There are beach hotels and there are also villas and private bungalows that you can stay at while vacationing in the island.