The Okapi Wildlife Reserve in Congo is a UNESCO World Heritage Site. It is well known for its lush scenery and biodiversity. 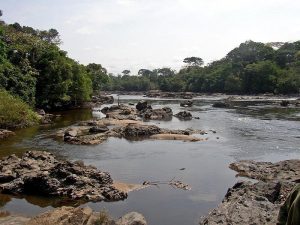 The reserve can be found within the Ituri Forest in Mambasa. The site is on the northeast side of the country. It is very close to the Ugamdan and Sudanese borders. The reserve covers an area of 14,000 km2. It makes up a fifth of the entire forest.

The reserve has a huge number of bird and mammal species. There are currently over 100 mammals in the forest. More may still be discovered in the future. One of the most striking is the Okapi giraffe (Okapia johnstoni).

There are about 5,000 of these in the Okapi Wildlife Reserve. Some of the other animals in the area are the giant genet (Genetta victoriae) and the aquatic genet (Osbornictis piscivora).

52 mammal species are in the reserve. Some of these animals are the giant forest hog, pygmy antelope and the bush pig. The anubis baboon, giant forest genet, giant ground pangolin and leopard also proliferate. Other species in the reserve are the African golden cat and the water chevrotain.

There are many other species to be found such as the marsh mongoose, black mongoose, Sitatunga antelope and bongo antelope. The brush-tailed porcupine, Zaire clawless otter and African dwarf crocodile are there.

Since its establishment, efforts to keep the site intact have never ceased. It is now the site of the Epulu Conservation and Research Center. This establishment emerged in 1928.

It was set up by American anthropologist Patrick Putnam. The purpose was to safeguard captured okapis. The methodology used today is different, but the goals are the same.

Most of the reserve is made up of rolling forested uplands. The mountains of the Albertine rift and the Zaire drainage system are its most vital features.

Transport fares will hinge on the distance and the mode of transport. There are some ferries going to and from Brazzaville and Kinshasa. The cost is around 10 to 25 USD.

The reserve is also home to seventeen primate species. These include four nocturnal and 13 diurnal. There are also 7,500 chimpanzees (Pan troglodytes).

The site has over 330 species of birds. Some of them are the golden-naped weaver, yellow-legged weaver, lyre-tailed honeyguide and black-collared lovebird.

The Okapi Wildlife Reserve is home to various types of animals, including endangered species. These include forest elephants. Flora in the area is quite diverse.