Kyrenia may be a small town as compared to the other cities in Northern Cyprus but it is one of the most popular destinations in these parts of Cyprus.

Its old-world charm, picturesque harbour views and historical landmarks make it one of the best holiday destinations in the world.

The old harbour in Kyrenia – Northern Cyprus in particular is packed with tourists and locals during summer. 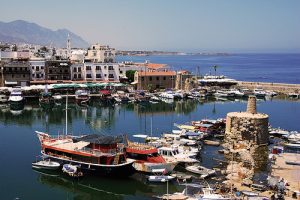 Getting around the town of Kyrenia can be easily done on foot as the town is small enough for a good walk around the tourist hotspots.

There are public buses that you can take to get you from other parts of Kyrenia into the old harbour in Kyrenia – Northern Cyprus.

Travelers visiting Kyrenia almost always choose to visit specifically to check out the old harbour in Kyrenia – Northern Cyprus. The harbour does not only give great views of the waters of the sea but also provide tourists with a glimpse of the city’s Venetian past.

The harbour side is lined with restaurants and coffee shops that are housed in the old carob storage facilities, carob once being a major export product of the city; there were many storage facilities around the harbour area for this chocolate substitute.

This being said, when you dine in one of the restaurants, you will instantly get the old Venetian charm of the place.

The restaurants and coffee shops provide you with a relaxing atmosphere as you dine or sip your favorite drink while looking at the soothing views of the waters which look even more spectacular at night.

You can also see luxury yachts docked at the harbour alongside fishing vessels giving you glimpse of a mix of the old and modern appeal of the city.

The old harbour in Kyrenia – Northern Cyprus, with its surrounding structures and sights, were the result of Venetian influence.

While there was a settlement here that dates as far back as the tenth century, the harbour that you see today traces its roots from Venetian influence.

This influence on the other hand, began when the Venetians took control of the island of Cyprus some time in the year 1498.

Bus rides cost about 3 to 4 Turkish liras per person.

If you want to get good seats in the restaurants or coffee shops during summer, it’s best to come in early as these are usually packed especially at night.