The Orheiul Vechi in Orhei is a natural historical site in Moldova. This archeological site has plenty for the intrepid explorer to examine.

The site is 35 km to the northeast of Chisinau and by the Raut River. The easiest way to reach the place is by taking one of the buses from Chisinau that goes directly to the site. It is possible to get there via Orhei but it is harder. The final bus from Chisinau departs around 4 in the afternoon.

Orheiul Vechi in Orhei contains ancient ruins. There are cave monasteries and an ancient fortress. Close to the old site are the villages of Trebujeni and Butuceni. Trebujeni is an old village with less than a thousand people in it. Butuceni has even fewer residents. Thanks to the River Raut, there is a deep valley in the site.

You will see that the surface is made up of shell limestone. There are several seashells in the surface as well. To enter the monastery, cross the bridge leading to Butuceni. Keep walking left and go along the slope. You will see some lovely meadows as you go along. 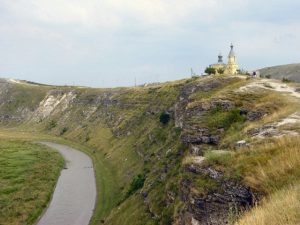 The site used to be one of the largest cities in the continent. There is evidence indicating it once had central heating, water baths and aqueducts. The name itself is translated as Old Orhei. The monastery has been uninhabited for a long time. Recently however, some monks have decided to live in the area.

The admission fee is 5 Lei. This will provide you entry into the nearby museum too. You can also buy some food at the nearby cafeteria.

Remnants of the fortress that Stefan cel Mare (Moldovan national hero) built can still be seen in the area. As you head to the cliffs, you will see the monasteries and the church nearby. The church is set over the cliff itself.

At the back of the cliff is a river. You can use this to take short cuts as you tour the site. You will get some fantastic views by strolling along the valley and to the cliff’s top.

What makes Orheiul Vechi in Orhei even more interesting is the unique landscape. The cliffs have large holes. This is striking because the rest of the country is plain. Compared to Moldova’s rolling hills, the landscape is more rugged.