The changing of the Oslo Royal Guard is one of the most interesting spectacles you will see in Norway. For many tourists, the sight of men in uniform taking part in the age old event is one of the highlights in any trip to the country. 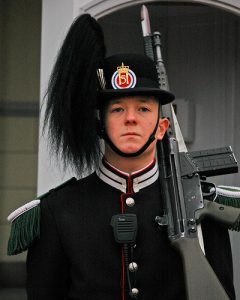 The event takes place at the Royal Palace of Oslo, home of the King of Norway. You can reach the place by going to Karl Johans Gate. This will take you to the palace area.

The whole process takes around 40 minutes. In summertime, a Norwegian military band and mounted police officers lead the guard parade beginning at Akershus Fortress. This takes place at 1:10 pm. The procession proceeds to Kirkegaten.

From there it goes to Karl Johans Gate and the palace. The changing of the Oslo Royal Guard will take place at 1:30 pm sharp. The guards at the procession are known as the King’s Guard. They are composed of men and women whose task is to guard the royal family 24/7.

The oldest settlements in the area making up Norway dates back to the late Paleolithic Age 11,000 years ago. Archaeologists have found artifacts going back 9,000 BC.

From the period 8300 BC to 7300 BC, the Fosna-Hensbacka culture prevailed in much of the country. Petroglyphs from the Neolithic Age depict hunters. The Bronze Age (1800 BC to 400 BC) and Iron Age saw other, more concrete settlements emerge.

The Viking Age (800–1066) saw Norwegians and the Swedes explore many lands. It was in the 11th century when the Norwegian kingdom was developed, although smaller kingdoms were in existence before it. The Black Death wiped out nearly half of the country’s population.

From 1536 to 1814, the country was a Denmark tributary. This alliance was defeated in the 1814 Napoleonic wars. Norway was given to Swden. The two countries would be locked in a union until 1905. After staying neutral in both World Wars, the country joined NATO in 1949.

You can watch the changing of the guard for free.

The best time to catch the changing of the guard is on May 17, Norway’s Constitution Day. On this day, the procession is conducted throughout the city. There will be marching bands during the procession. The royal family also participates in the procession.

The changing of the Oslo Royal Guard happens everyday at 1:30 pm. This event takes place regardless of the weather condition.