The tourist attractions at Persepolis Iran never fail to draw in tourists. It is one of the most famous of the ancient cities in the Middle East. 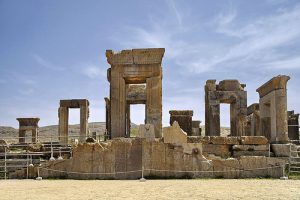 The city is located about 70 km north of Shiraz. This is at the Province of Fars. There are several ways to get to the city, but the easiest is to get in touch with a tour organizer. They will provide the vehicle and take you to the place.

The terrace is home to several large edifices. Many of the pillars are still whole. At the back of Takht-e Jamshid are rock hewn sepulchers. The facades are laden with rich reliefs. At the other end of Pulwar is a rock wall with tombs. The Gates of Nations was made up of the Great Hall.

You will still be able to see the Lamassus (bulls with heads of men) at the western side. These are among the biggest tourist attractions at Persepolis. The other pair has wings. The name of King Xerxes was etched on the entrances. This would ensure that anyone visiting the place would see it.

During the Achaemenid dynasty, the city served as the capital of the Persian Empire. Some of the ruins in the city date from 515 BCE. Based on the archaeological evidence, the Council Hall and the Apadana Palace were built by the Achaemenid dynasty kings. The building of the terrace was continued until the dynasty collapsed.

Diggings in the 1930s show that it was Cyrus who selected the site. However, it was Darius who had the palace constructed. The prevailing theory is that the city was built by the Persians to showcase their power. It also served as the home of the king.

There are several tours that can take you in and around the site. There are some tours that cost 60 Euros. However, competition among tour operators is lowering the costs. Make sure to compare prices first.

The Apadana Palace was built by Darius the Great beginning 515 BC and was finished by his son Xerxes I 30 years later. The grand hall consists of a square. Each side has a length of 60 meters. Many of the columns are still standing.

The Throne Hall is another of the tourist attractions at Persepolis. It is the second biggest edifice at the terrace. The doorways are laden with reliefs depicting the king fighting several monsters.