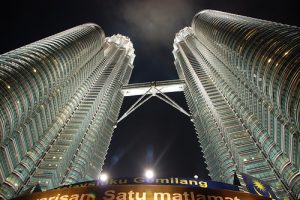 Traveling from abroad, quickest and easiest entry point to get to the Petronas Towers is to book a flight landing in the Kuala Lumpur International Airport. This airport also serves domestic flights from various parts of the country. If you want a less congested airport to land in then book a flight that takes a trip to the Subang Airport.

If you want to drive you need to take the North South Expressway, which means you either exit at Sungai Besi or Jalan Duta. Another option is to take the bus, which will have you pick any of the bus stations such as Hentian Puduraya and Terminal Bersepadu Selatan among many others. Another land transportation option is hop on a train such as the KTM intercity trains, for instance. Once you’re in Kuala Lumpur you may take a taxi to the Petronas Twin Towers in Kuala Lumpur – Malaysia.

The Petronas Twin Towers in Kuala Lumpur – Malaysia is an attraction in itself. Visit packages are often offered to visitors and tourists. Part of the tour includes a trip up to the 41st level where the Skybridge is located. Those taking the tour will be treated to a one of a kind view of the city’s skyline via its observation deck. Newer visit packages will also include a trip to the top of floor on Tower 2.

The minds behind the design of the Petronas Twin Towers in Kuala Lumpur – Malaysia included architects Djay Cerico and Cesar Pelli and engineers Domingo Basa and Julius Gold. The project took a total of seven years to build and was completed in the year 1998.

The cost of importing steel became a hurdle that the construction team had to deal with. To cope with the costs, the team used a rather innovative and radical design that saved the company who commissioned the project a good sum of money. They used reinforced concrete, which is a material that Asian contractors are already familiar with.

Getting one of the visit packages will cost a minimum of RM 3 for each participant. That is the rate for the basic Skybridge tour. The premium package tour, which includes fine dining, will cost some RM 350.

The tours are scheduled from Tuesday to Sunday from 9 am to 5 pm. Tours will only be available on Mondays during public holidays.