The Pha That Luang stupa is one of the most important national monuments in Laos. If you are going to visit the country, this is a landmark that you do not want to miss. 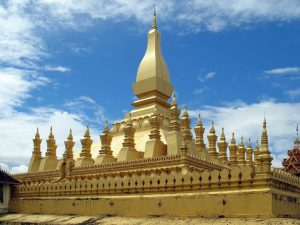 The stupa is located in the center of Vientiane. You can ride on any of the public transport in the city to reach the site.

The design of the building embodies numerous aspects of Lao identity and culture. The complex is made up of three levels. All of them are symbolic of Buddhist beliefs.

The walls are encompassed by wall cloisters. When you get up close to the site, you will see it is richly detailed. The first level has four halls for prayer. They symbolize the world of material things.

The second level of the Pha That Luang stupa has 288 siimaa and 120 lotus petals. It symbolizes the various levels of perfection beginning with giving alms to equanimity. There are portals with intricately designed gates here.

The gates will go up to the third level. The third level has spires shaped like lotus buds. If you examine the site, it is actually modeled after a lotus blossoming from the waters. The symbolism is apt for enlightenment in Buddhism.

The stupa was originally constructed as an Indic shrine sometime in the third century. According to the story, some monks went to the temple and put a Buddhist relic inside the stupa.

During the 13th century, it was revamped and turned into a Khmer temple. During the 16th century, the stupa was rebuilt again. It was set about four kilometers from the middle of Vientiane.

In 1828, the stupa was destroyed during the Thai invasion. It was completely abandoned until 1900. That was the year when the French started rebuilding it. The French builders used the original drawings so the edifice was built according to the original plans. It was finished in the 1930s.

There is an entrance fee amounting to 5000 kip.

The third level is 98 feet long by all the sides. Level two has dimensions of 157 feet on the sides. The first level dimensions are 223 feet by 226 feet. Overall, the height of the stupa is 147.6 feet.

When you visit the Pha That Luang stupa, take note of the gate. It was not there before. But it has been installed to prevent traffic. The walls around it are approximately 280 feet in length.