Phong Nha-Ke Bang in Quang Binh – Vietnam is located about 30 kilometers from the South China Sea. It is near to and accessible via the Ho Chi Minh Highway. It is also near National Road 1A. Visitors may also get to the place via the small airport via helicopter or a small plane. Others may take the Hanoi-Saigon Railway but will be required to travel an extra 28 kilometers just to get to the park.

Phong Nha-Ke Bang is of the UNESCO World Heritage Sites in north-central Vietnam. It is a center for ecotourism and features some of the best natural sites in the country. This national park is actually situated on a plateau. This land formation is also considered the most distinct sample of karst landform in this Asian region. 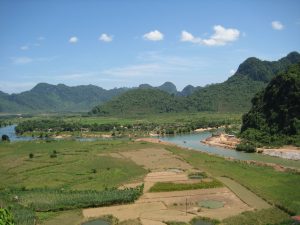 Other than being a national park, Phong Nha-Ke Bang in Quang Binh – Vietnam is also a nature reserve, which makes it quite an interesting place for outdoorsmen and nature buffs. The reserve covers more than 41,000 hectares. However, the park itself covers only about 857.54 square kilometers.

One of the favorite activities here is cave hopping and exploration. One of the best caves in the park is the Phong Nha Cave. Stalagmite formations here are astounding. The other caves in the area also offer complex underground river systems. However, the Phong Nha Cave is noted to have the longest underground river nestled within by fine sand beaches. Phong Nha-Ke Bang in Quang Binh – Vietnam has a total of 300 caves and grottoes in its entire area.

Outdoor activities such as adventure tours and mountain climbing are quite popular here. The biodiversity in this national park is very notable. It has a wide variety of flora and fauna taking refuge in its tropical wet forest is enough to delight any nature buff. There are also over 200 bird species that call this place home.

The place is also has other both flora and fauna that are endemic to the area including a variety of orchids, shrubbery, primates, eels, reptiles, and amphibians housed within its protected areas. There are even rare species that can only be found within the confines of this nature reserve.

The country’s Bureau of Tourism made the first effort to promote the place as a tourist destination in 1937. The 90’s were a turning point in its history. Several documented explorations were made for research in cooperation with foreign research and educational associations and institutions. It was in this time that documents were submitted to UNESCO. Further explorations and research were conducted until the place was made a nature reserve.

Tours and other visitor activities in Phong Nha-Ke Bang in Quang Binh – Vietnam are managed by the local Center for Ecotourism and Culture. Visitors may rent any of the 240 plus boats and hire any of the tourist guides. Tours here would cost an average of P130.