Rome is a large city and is divided into several different districts. One of these districts is called the North Center and here, you will find Piazza del Popolo in Rome – Italy. 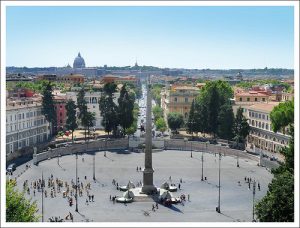 Piazza del Popolo in Rome – Italy is located in the northern tip of the city simply known as North Center. It is between the Pincian Hill and the Tevere River.

You can reach Piazza del Popolo in Rome – Italy via the Metro or taking a bus ride into North Center.

If you will be taking the Metro, take Metro Line A which stops directly at the piazza. For a bus ride, take bus number 117 which will go through San Giovanni, the Colosseum, Piazza di Spagna and then finally to Piazza del Popolo.

Upon entering the premises of the urban square known as Piazza del Popolo in Rome – Italy, you will instantly notice an imposing Egyptian obelisk that stands in its center.

This obelisk is from the ancient city of Egypt, Heliopolis, and was constructed during the reigns of Sety I and Ramesses II. The obelisk alone is already a sight to behold and its historical significance adds to its charm and attraction.

The Popolo Obelisk is the 2nd oldest obelisk in Rome and is also the tallest of all obelisks found in Rome.

There are also two fountains flanking the piazza; one on the west side and one on the east side.

The Fountain of Neptune, otherwise known as Fontana di Nettuno is on the western side while the eastern side has Mars flanked by the river gods known as Tiber and Anio.

Standing in the middle of the piazza are four smaller fountains collectively known as Fontana dell’ Obelisco. Each fountain is guarded by a lion sitting on a plinth.

The Piazza del Popolo in Rome – Italy that stands today was designed by Guiseppe Valadier, an Italian architect. He used the Neo-Classical architectural design and worked on this from 1811 up to 1822.

He took out the fountain constructed in the year 1572 by Italian sculptor and architect, Giacomo della Porta. He likewise took down a few other structures that he deemed insignificant to the layout he had in mind.

Valadier also envisioned the piazza as a square that links to the stature of the Pincian Hill.

There is no cost to visit the Piazza del Popolo in Rome – Italy. There are accommodations around the piazza and these cost about US$ 128 per room, per night up to US$ 589; depending on which hotel you will be staying in.

Tickets for the Metro or bus cost about 1 Euro per ride.

Tickets for the Metro or buses should be bought from a Tabacchi, a local tobacco shop that sells the tickets. These usually have a large “T” sign so they will be hard to miss.