Piran – Slovenia is a town in the country regarded by many as the most beautiful seaside town among all coastal towns in Slovenia. Abundant in medieval structures, visitors coming here for the first time feel as if they have stepped back in time.

Piran – Slovenia is located in the south-west parts of the country, on the tip of the peninsula of Piran which is situated on the Gulf of Piran. It is bordered by Croatia on its southern side and Izola as well as Koper on its eastern side.

As there are no airports in Piran – Slovenia, the nearest airport that you can fly in to is the one in Trieste. From Trieste, you can catch a bus going to Piran which will take about one hour.

There are likewise bus services from other parts of Slovenia that ply the route going to Piran.

The Piran Town Walls were constructed around the town to protect it from foreign invasion. A huger part of this fortification still stands today and is well-preserved.

There is also the Venetian House designed in Venetian-Gothic architectural style. It is said that a very rich merchant had this house constructed for his mistress.

There is an interesting inscription in the middle of the upper windows that translates to “let them talk” perhaps owing to this little bit of information about the house having been built for a mistress. 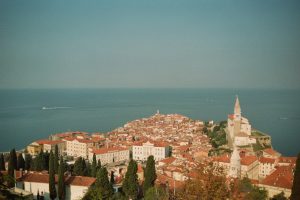 On Tartini Square, a plaza named after the famous violinist native to Piran, Guiseppe Tartini; you can find the violinist’s old house. The house was first designed in Gothic style back in 1384 but was later on renovated to the Neo-Classical architectural design.

Incidentally, you can also find a monument in honor of Tartini right on the square named after him.

Also, do not miss visiting the Church of St. George which gives you a good panoramic view of the city and its harbor.

Between 178 BC and 177 BC, the peninsula of Piran was annexed to the Roman Empire. During the seventh century, under Byzantine sovereignty, the town became one of the most heavily-fortified towns in the country.

In the year 1812, the Battle of Pirano took place within the waters surrounding the peninsula; between French and British naval forces. The French lost the battle as they surrendered to British Captain, John Talbot.

In October of 2010, Piran elected Peter Bossman as its town mayor; a native of Ghana who moved to Piran – Slovenia in the latter years of the ‘70s. This was a historic event as this is the first time that a black mayor was ever elected in Slovenia.

Accommodations in Piran – Slovenia are very limited. There is a hostel and a youth hotel within Piran and rooms here cost about €22 to €25. Nearby Piran however, you can find several excellent accommodations.

The best way to explore Piran – Slovenia is on foot as the town is quite small and you can take your time admiring the sights as you walk through its paths.