Comparable to Stonehenge and Easter Island, the Plain of Jars in Laos is one of the most mysterious sites in the world. No one can quite figure out how thousands of stone jars came to appear on these grounds, and it has captured people’s attention and imagination for a thousand years or more. 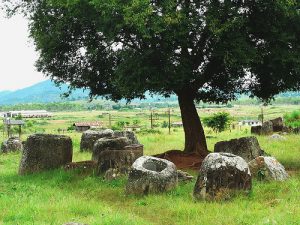 The Plain of Jars is composed of over 90 sites scattered throughout the Xieng Khouang province of Laos. The most visited of these is Site 1, which is found near the town of Phonsavan. Visitors to the site can go there by public bus to Phonsavan, which occasionally come with military escort to serve as protection from any highway robbers. But the easiest way to reach the town is by plane from the Lao capital city of Vientiane. Once in Phonsavan, the Plain of Jars is only a half hour motorbike ride away.

Each of the 90-plus sites in the Plain of Jars contains 1 to 400 giant stone jars, varying in size from 1 to 3 meters. Of these sites, 7 are open to the public: Sites 1, 2 and 3, all located south of Phonsavan; Site 16, which is close to the old capital of Xieng Khouang; Site 23, which is near Muang Kham’s hot spring; Site 25 in the district of Muang Phukoot; and Site 52, found close to a traditional Hmong village, and with a total of 392 jars is the largest known of all the jar sites to date. But the biggest of the jars is found at Site 1; with a height of more than 2 meters and nearly just as wide, it is also unique for being the only decorated jar among the others.

The Plain of Jars is believed to date back to the Iron Age, from 500 BCE (Before the Common Era) to 500 CE (Comon Era). Lao folklore attributed the jars to a race of giants that supposedly lived in the area. Particularly, the jars were said to have been created by the legendary king Khun Cheung for brewing and storing large quantities of the rice wine Lao-lao. Studies conducted during the 1930’s deduced that the jars were connected with prehistoric funerary practices. Sure enough, this is supported by later excavations, which yielded traces of human remains and other artifacts related to burial rites around the jars. It is also possible that the jars were once used to collect rainwater for passing travelers. In 1992, the Plain of Jars was added to UNESCO’s tentative list of Laos World Heritage Sites, and is presently pending full induction.

To get around from Phonsavan to the Plain of Jars, one can rent a motorbike for 100,000 Lao Kip per day.