Liechtenstein is a relatively small country but what it lacks in size, it makes up for it through its beautiful natural surroundings.

A picturesque tiny country with magnificent hills, valleys and mountaintops; travelers who wish to spend a few days amidst tranquil settings will enjoy a stay here.

Planken – Liechtenstein is the least populated village in the country thereby offering you a quiet and relaxing visit. 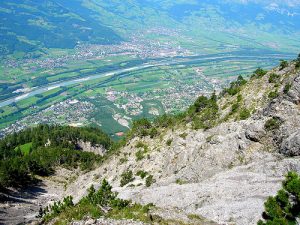 Planken – Liechtenstein is located close to Nendeln, Schaan, Neschen and Vaduz, the capital city of the country. It lies at the base of the Three Sisters Mountain Range.

With Liechtenstein being such a small country, there are no major airports here. Your best option is to travel by train or bus. To reach Planken – Liechtenstein, you can take a bus from nearby cities such as Vaduz.

There are regular bus schedules that ply the route going into the village so reaching the village is relatively easy.

You can also rent a bike to get to the village.

The tiny village of Planken – Liechtenstein offers scenic views of the Rhine Valley. From the village, you can also get good vistas of the Swiss Mountains.

There is a small restaurant in the village that you can visit and dining here is not only relaxing but also provides you with more views of the mountains.

For those looking to do a bit of climbing and trekking, the village makes for the perfect base to hike up the Three Sisters Mountain Range.

The village also has several celebrations held throughout the year including the Village Festival and the Pumpkin Festival.

Planken – Liechtenstein has only about three hundred and sixty-six inhabitants, making it as the least populated area in the country. It is believed that it was around the thirteenth century that the Walliser families first settled here.

Planken was first mentioned in a document in the year 1361, in a sales document which mentioned the salesperson as hailing from Planken.

During the 30-year war that ravaged most of Europe, Planken was spared from foreign invasion but it did suffer through steep taxes and forced war contributions.

The village suffered destruction from a fire in the year 1869 and contingency measures were put in place to have the village ready in case a fire breaks out again.

With the construction of the road network that links the village to other parts of the country, tourism blossomed, albeit in small quantities.

Bus cards, which are valid for up to 7 days, cost only CHF 10 each. Accommodations close to Planken – Liechtenstein range from CHF 83 up to CHF 199 per room, per night.