The Plitvice Lakes National Park is a UNESCO World Heritage Site known throughout Croatia. The place is known for its diverse features, flora and fauna. 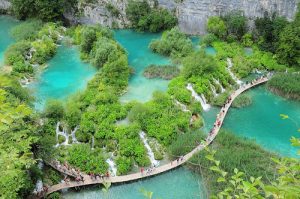 The park is situated between Zadar at the coast and the capital city Zagreb.

The park is well known for 16 lovely lakes which are linked by equally beautiful waterfalls. The wildlife is varied, with plenty of rare birds, boars, wolves, bears and deer. The beautiful landscapes also make hiking a very popular activity.

Whether you walk with a guide or not, the views at the Plitvice Lakes National Park will impress you. The park has booklets detailing the different walks and paths. These are of differing lengths, so you can find one to suit your preferences.

Other animals in the park are the capercaillie, wild cat, lynx and owl. Eagles can also be seen in the park. There are 50 mammal species in the site. There 321 types of butterflies.

The area around the park has been inhabited by people for thousands of years. Some of the civilizations that settled there are the Turks, Slavs, Avars and Romans. Japods, Celts, Thracians and Illyrians. Under Julius Caesar’s rule, the area was annexed into Illyricum province in the Roman Empire.

The Ostrogoths subsequently conquered the area. In the 6th century, the Avars arrived with the Croats. Fighting broke out between the Croats and the Avars, and the Croats prevailed. They settled in the area permanently.

Over time, the lakes would become a component of the Croatian Kingdom. Under the ruler-ship of the Frankopan and Zrinski families, the area would grow. Today, it is the site of this popular park.

The entrance fee for adults is 80 Kunas (15.50 USD) from November to March. From April to October, the entrance fee is 110 Kunas or 21 USD. The ticket fees for children are cheaper. Groups with at least 15 members get a discount.

The Plitvice Lakes National Park also has hotels for those who want to stay there for a while. You can also stay at the Camp Korana campsite. This is only 7 kilometers from entrance 1.