A trip to Portsmouth in Hampshire, England is perfect for those who are fascinated with British naval history. But even those who aren’t history buffs will find the place exciting.

Most of the city is on Portsea Island. The whole island is separated off the mainland by 30 m of sea water. All the major train services from London can take you to the city. There are also ferries from France and Spain that will take you there. Southampton Airport is 20 mi from the city.

A train service from Southampton is also available. Train services will take about 90 minutes. You can also try the services at Southampton, Bath and Bristol and Cardiff. If you are driving a car, get on the M275 motorway. If you are at London, head to M3 south. 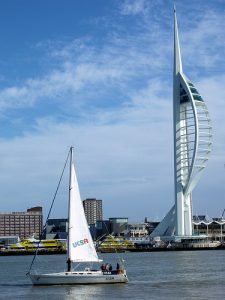 A trip to Portsmouth in Hampshire usually includes a visit to the Historic Dockyard. This naval base contains the HMS Warrior, HMS Victory and Mary Rose among others. The Dockyard also houses the museum of the Royal Navy. Also worth checking out is the Ship Anon, an old pub not far from the Dockyard.

The Spinnaker Tower is over 170 m high. It is over the harbor. You can climb the tower and enjoy the view. The Southsea Castle was included among the fortifications made by Henry VIII.

The Southsea Seafront stretches for four miles. It is surrounded by lovely gardens. The Royal Marines Museum showcases the history of the British Navy via numerous displays.

The city was founded in 1180, courtesy of Jean De Gisors. He was a businessman who owned several ships. He began separating the land for housing purpose.

Many tour providers sell tickets so you can access many of the sites. These tickets vary in cost, although many start at 19.90 Pounds for an adult. For seniors, the charge is 16.85 and for a child, 14.30. A ticket for the family usually costs 56.15 Pounds.