The tourist attractions at Potosi have always drawn in visitors at Bolivia. Not only is it the highest city in the world, but is also one of the most attractive. 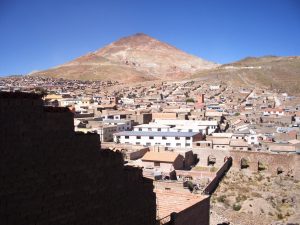 If you are at the bus terminal it is only half an hour’s walk to the center of the city. There are also several cabs in the city. You can catch any of the buses at Oruro. The cheapest way to get around is via taxi.

The Casa Nacional de Moneda is filled with modern artworks, religious paintings and various artifacts. The Convento de Santa Teresa on the other hand, provides information about the Carmelite nuns. The Compania de Jesus on the other hand, offers excellent views of the surrounding area.

Of course, no trip to the city will be complete without checking out the cooperative mines. These are some of the biggest tourist attractions at Potosi. You will be able to crawl into the mines. There are also gift shops nearby. You will learn a lot of information about mining here.

The city was established in 1546 following the uncovering of the Cerro Rico silver deposits. Soon enough, it became one of the most prosperous cities in Bolivia. It has been estimated that over 60,000 tons of silver have been mined here. The city name was taken from San Luis de Potosi in Mexico.

The name was given to show their hopes of equal wealth. The wealth was used to construct several churches. But many of the slaves working in the mines died. By the 1800s though, the silver had dwindled. The whole city has been declared a UNESCO World Heritage Site.

There are several good places to eat. Mercado Central is the place to be for the cheapest food. Other places where you can grab some food are the Sky Room, Sumaj Orcko and Chifa Rosa.

For some sweet treats, check out Pasteleria Cherrys. The El Meson is an upmarket restaurant. If looking for lodging places, check out the La Casona Hostal and the Koala Den.

If you are interested in visiting the tourist attractions at Potosi, make sure to visit the various colonial mansions and religious buildings around its narrow streets. They will tell you a lot about the history of the city.