Preah Vihear Temple in Preah Vihear, Cambodia is a stunning site as it is situated on the cliff of Dangrek Mountains. But there’s more to the site than its beautiful location. 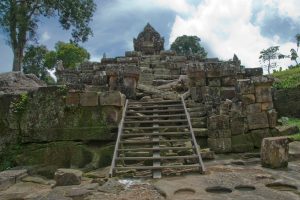 The Preah Vihear Temple is located at the Dangrek Mountains, suspended on a cliff that is 525 meters high.

Getting to the site is easier via the Thailand border because it is more accessible from there than from the Cambodian capital of Phnom Penh. However, several disputes lead to the blockage of passage from Thailand to the site.

So your best option is to rent a taxi or motorbike for the day, which will cost you about a thousand bahts. Aside from that amount, you will have to keep loose change to present as gifts to soldiers as the province of Preah Vihear is only accessible through military bases of Cambodia.

The sight of Preah Vihear Temple is an adventure in itself. The hike there is a different story altogether. Overall, the Preah Vihear Temple is a must-see for its amazing location at the hilltop, which will give you a commanding view of the surroundings. There’s also the tasteful French architecture, which is characteristic of most Cambodian temples built in certain periods.

Although not confirmed, the Preah Vihear Temple was built as a token to the god Shiva.

There is no entrance fee to see the Preah Vihear Temple. However, you will have to prepare small gifts to the soldiers and their families that you will meet along the way.

The Preah Vihear Temple has been the subject of dispute for so many years and the battle is not yet over until now. It has been occupied by Thailand for so many years until Cambodia claimed ownership as based upon a map. Battles in international court pursued thereafter.

Although the dispute is far from being settled peacefully, visiting the Preah Vihear Temple is still worth a try as it has been proclaimed a UNESCO World Heritage Site since 2008.

To get around the temple, you have to painstakingly take foot travel. If you do not like climbing the hill, you can hire a motorbike that will take you to the foot of the temple. From there, you will just need to conquer the stairs to see the beauty that lies within the beautiful tourist site.