For this reason, you can see various Roman structures around town and foremost of which is the Pula Amphitheater in Pula – Croatia. 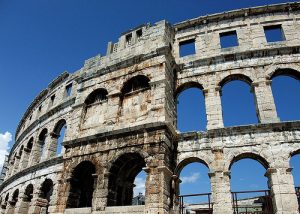 Pula Amphitheater in Pula – Croatia is located at the northern parts of the old downtown area of Pula, along Flavijevska.

Arriving in Pula can be through the international airport located here. From the airport, you can take a taxi or a bus to get to the city center.

From the bus terminal at the city center, you can once again take either a taxi or a bus to get to Pula Amphitheater in Pula – Croatia. As the amphitheater is a popular tourist destination, you simply have to tell the driver where you intend to go and you will be dropped off at the nearest point.

Tourists can go inside the Pula Amphitheater in Pula – Croatia and explore the grounds. Being one of the best – preserved Roman structures in the country, you can still see the imposing walls, towering at 30 meters high still intact plus the rows of seventy – two arches.

There are caverns underneath the Colosseum which you can explore as well. The underground pathways contain a few relics from archeological expeditions plus an exhibit about the olive industry that thrived in these parts of the country during the town’s earlier days.

If you happen to be visiting in July, you can also come and watch the films being shown as part of the Pula Film Festival.

Concerts also take place within the arena during certain times of the year so you may also get to watch any one of these if one should happen to be playing at the time of your visit.

The Pula Amphitheater in Pula – Croatia, otherwise known as the Arena, was constructed somewhere around 27 BC and 68 AD. Under the Roman Emperor Augustus, construction of the arena began. The amphitheater then was made entirely out of wood.

During the time of Emperor Claudius, the amphitheater was rebuilt using stones. The arena being small at the time, was enlarged to make it more suitable for gladiatorial fights.

During the 4th century AD, a Christian by the name of Germanus was martyred within the walls of the arena.

By the 5th century, stones from the amphitheater were taken by the locals and by the Middle Ages, this was simply used for grazing and special events.

During the early 1800s, restoration of the arena took place and in the year 1932, the arena was used for theatrical productions. Today, it is the venue for special events such as film festivals and concerts.

Entry fee to the Pula Amphitheater in Pula – Croatia is about 20 Kuna per person. Entry fee includes exploring the underground passages as well.

The Pula Amphitheater in Pula – Croatia has been used in various films including the 1999 film, Titus. World-renowned artists who have held concerts here include Luciano Pavarotti, Andrea Bocelli, Elton John, Jamiroquai and Jose Carreras.