One of the major attractions of Indonesia is definitely Puri Agung Kanginan in Amplapura, Indonesia. It is basically a three-part castle with very exciting sites of interests on its own.

Puri Agung Kanginan was built in the 19th Century. Its beauty, although diminished by several disasters such as the 1963 earthquake, remains magical. Visitors who drop by the palace concludes that even with a portion that was destroyed by the strong earthquake, it is still worthy to pay a visit. That’s because there are many other parts of the castle that will keep your eyes glimmering.

Basically, Puri Agung Kanginan has three parts. There’s the residential area for the royalty, the gardens, and the Bengingah or the social hall. It is a complex of buildings that is rich in elegance, luxury, and class.

Lions guard the main gate. On the right side of the ticketing office lies another gate that will lead you to the gardens then to the innermost part of the palace where the residential apartments to the princely family are located.

The main palace precinct contains another complex of buildings. There’s the Bale London, which is decorated with carved doors and well restored paintings. It also contains the instruments of the exclusive gamelan orchestra, only being played in the presence of the Raja.

There’s also the Bale Pemandesan, which is where the ritual tooth-filling is performed on the Raja’s children. 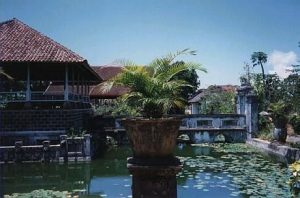 There’s also the Puri Madura, also known as the Maskerdam. It is an audience hall that can accommodate up to a hundred and fifty people. Unfortunately, the audience hall is no longer available for exploration as it has been closed since the last occupant died in 1966. You can only look through the windows.

There are many other buildings outside the main palace complex. But not all of them belong to the Puri Agung. Some belong to two other palaces in the vicinity – the Puri Gede and the Puri Kertasura.

Aside from the castles, there is also an artificial pond with a pavilion. There is also a decoration that depicts the epic Ramayana.

The Puri Agung Kanginan is located at Amlapura, Indonesia, It is 80 kilometers east of Denpasar in the Karangasem Regency. Nearby Puri Agung is a water park called Tirta Gingga and a mount and temple called Seraya. So a trip to the palace is definitely worthwhile.

And oh, there is an admission charge for your entry; the palace is not for free exploration.