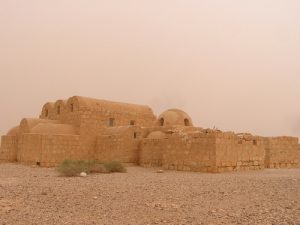 The desert castle can be found at the Zarqa Governorate in eastern Jordan. It can be easily reached via a tour bus or car. The site is 53 miles (85 kilometers) from Amman.

The edifice is actually the remains of a much bigger complex that included a castle. The castle has been destroyed, but the county cabin can still be seen. This was used by the royals as a place for relaxation. The edifice is composed of limestone and basalt. Those who go on a trip to Qusair Amra often do so to examine the frescoes.

At the vault there are frescoes of nude women, drinking of wine and hunting activities. Some of the most interesting depictions are of animals not commonly found in Jordan. In fact many of the animals shown are from Persia. There are also frescoes showing how the complex was built. There is also a depiction of the king on his throne.

The castle was built sometime in the 8th century. Many archaeologists believe that it was constructed under the orders of Umayyad caliph Walid I. However, some researchers believe that Yazid III or Walid II were actually responsible for its building.

It is a fact that Walid enjoyed the activities shown on the frescoes. The mother of Yazid was a Persian and was known for his love of pleasure. This may also help explain some of the other frescoes on the site.

It was in 1898 when the structure was rediscovered. Alois Musil was responsible for its rediscovery. However, it was the Austrian artist Mielich who popularized the frescoes in his book.

The trip to Jordan will cost around 1500 USD.

The “six kings” image shows the caliph along with other leaders. According to researchers, the image refers to the triumph of the caliph over his foes. Particularly fascinating are the decorations at the changing room. Here, animals are shown engaged in activities usually done by humans.

A trip to Qusair Amra will not be complete without looking at the image of an angel staring down at a person in a shroud. Some interpret this to be a scene of death, while others of lovers. There is also said to be a figure of Christ in the complex.