The Reunification Palace in Ho Chi Minh City – Vietnam is located on 135 Nam Ky Khoi Nghia Street, District 1, Ho Chi Minh City. It is both a historical palace and once a presidential palace as well. It was once known as the Independence Palace. Those who wish to take a tour of the place can travel to the city by bus and arrive at the Ho Chi Minh City Bus Center.

The Reunification Palace was once the presidential palace of Southern Vietnam. It is also one of the popular tourist destinations in Ho Chi Minh City. The palace is now beautifully preserved as a museum and a solid reminder of the country’s rich history.

Visitors can still see the tank that drove into the grounds of the palace running over its gates. The tank is left there on the front lawn for all visitors to see. The palace itself is a magnificent work designed by Soviet architects. Its chambers are wide and the decor is a fine sample of the architectural style espoused back in the 1960s. 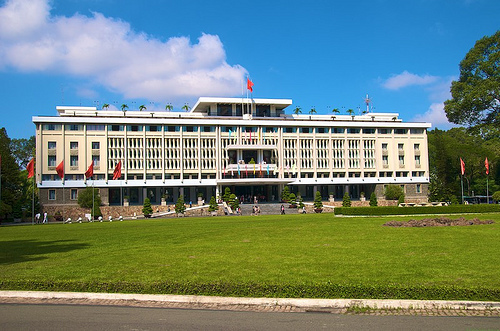 The rooms that visitors are allowed to tour are left as they were during the days of conflict. A lot of the rooms still depict the endless and yet crucial meetings held in them during the previous war. The command room is a notable section of the Reunification Palace in Ho Chi Minh City – Vietnam.

Nowadays, a recreation room has been set up and decorated with a circular sofa, which at times act as a resting point for visitors and tourists. Another highlight of the palace is the basement maze, which is usually a thrilling part of the palace to visit. The underground tunnels found here extends into many different locations including that one tunnel that goes all the way to the city’s Revolutionary Museum.

The origins of the Reunification Palace in Ho Chi Minh City – Vietnam began in 1863 when plans for a new palace were made to consolidate the new French colony. The completion of the said work was stalled and eventually fell behind due to the Franco-Prussian War. The palace was only completed in 1873.

The palace became the headquarters of the invading Japanese during World War II. France surrendered the place in 1954. A North Vietnamese tank ran down the main gate on April 30, 1975 signaling the end of the Vietnam War. The palace was given its present name in November of 1975 after negotiations between North Vietnam and the south’s colleagues.