The Riffa Fort in Bahrain is an astounding view you should never miss. Aside from providing a fantastic picturesque view, it is also has a very rich historical value, giving you a glimpse of the country in previous times along the way. 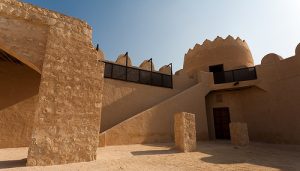 The Riffa Fort is strategically located in the city of Ar-Rifa. It is only over 10 kilometers away from the main attractions in the country including the Bahrain World Trade Center, the Bahrain National Museum, the Bab Al Bahrain, and the Arad Fort.

Take a taxi from any of the popular commercial points to get to the Riffa Fort.

The amazing thing about Riffa Fort is truly its architecture. It is practically an old building that has a bravado that did not diminish over time. Its appeal never withered through time. It has the same handsome appeal that people from foreign land would find truly amusing.

Riffa Fort is made of sandstone. It is basically a sandstone structure where the royal families of the 19th century thrived. All in all, it has 35 rooms packed in the three square yard area.

Aside from the architecture, parts of the Riffa Fort are definitely amazing. There is the interesting air-conditioning system that is not quite like what we use in the modern day but has been quite useful. There is also the exciting feel of the wind towers, which is best experienced in this particular tourist site.

Since Riffa Fort overviews the Hunanaiya Valley and is wonderful sight on its own, it was reconstructed to become a tourist attraction. Entrance fee is free and the public could easily explore the beauty of the fort with no charge at all.

There are lots of things that you can do in Bahrain aside from paying a visit to the historical Riffa Fort. Once you are done exploring the site, you can easily move on to other amusing tourist sites that are definitely worth the time and effort. For one, there’s the 400-year-old tree aptly called the Tree of Life at Jebel Dukhan. For another, there are the mosques and other ancient structures that would surely feed your imagination.