The tourist attractions at Riga is the main reason why Latvia has become one of the top travel destinations in Europe. It is the capital of Latvia and has about 50% of the population of the country. 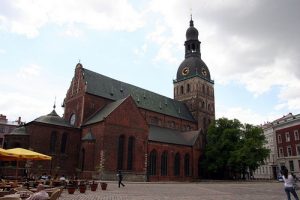 Riga International Airport is served by several international airlines. There are also bus connections from Lithuania, Estonia and other cities in the Baltic. Tallink runs a ferry service from the Latvian capital and Stockholm.

The Freedom Monument is one of the main national symbols in the country. You can also visit the Museum Jews in Latvia and Jewish Community, near the Freedom Monument. Architecture aficionados will want to visit the streets of Elizabetes and Alberta where they can see the works of Eisenstein.

At Esplanade Park, you will see the Orthodox Cathedral and the National Museum of Art. This is the place to view works by Latvian artists. This is one of the biggest tourist attractions at Riga. Also worth checking out are the Railway Museum, the Aviation Museum and the Latvian National Opera building.

Albert of Bremen established the city in 1201. It was designed to be a base for Northern Crusades. During the days of the Hanseatic League, it became a major trade center. In 1522, the Reformation came to the land, ending the rule of the bishops. The city would become part of Sweden and then the Empire of Russia.

During World War II, the city was bombed, but the ruins were eventually rebuilt by the government. This would boost tourism. The city would become the capital of Latvia. It would remain the capital of the city even after the collapse of the Soviet Union.

The cost of the ferry fares begin at 103 Euros. The typical train rides cost 85 LVL. There are cheaper train fares at 25 LVL, but there is not much in terms of amenities. Budget and moderate hotels will have starting costs of 25 Euros up to 45 Euros.

The Central Market can be found right next to the international bus station. You can buy fresh fruits and vegetables here. Some of the stalls sell clothes and souvenir items. The Mezaparks are filled with elegant homes dating from the pre-war era.

The zoo is one of the more popular tourist attractions at Riga. You can also drop by the Motor Musem and the Ethnographic Open Air Museum. It has exhibits about traditional Latvian houses.