The Rila mountain ranges are the highest in all of the Balkans and Bulgaria. The highest point is Musala at over 2,800 m.

The range encompasses an area over 2,400 sq km. A larger portion of the mountain is in the Rila National Park. The park is at the mountains (between 23 degrees 07’ and 23 degrees 55’ east longitude and 41 degrees 53’ and 42 degrees 19’ north). The park covers the treeless portions by the ridge of the mountain.

The mountain’s dome can be seen from the valleys around it. An aerial view will show that Borovets Saddle hooks up the Musala Bridge. The Yundola Saddle connects the mountain range on the east with Rhodopes. The area is also famous for the Rila Monastery. It is the most important monastery in Bulgaria, established in the 10th century.

The Rila National Park is laden with Macedonian pine, white fir and spruce. The park encompasses over a hundred peaks over 2,000 m high. There are more than 120 lakes in it. Over 70 go back to the last Ice Age.

The Rila mountain ranges are a component of the Macedono-Thracian Massif. The ranges were formed 250,000,000 years ago around the Paleozoic era.

The mountain was created from crystal schists, gneiss rocks and granite. 12, 000 years ago, the snow line was set 2,100 m above sea level. Above this line, glaciers would create deep cirques, moraines, valleys and rock pinnacles. The park was created on February 24, 1992. It was designed to protect the mountain range and the environment around it. 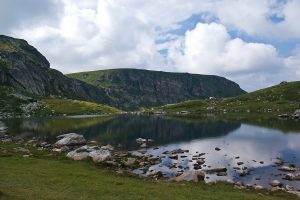 The origin of the name is unclear, but many researchers are of the opinion it is Thracian. The word means “mountain that is well watered”. The mountain range has 200 glacial lakes. Hot springs are also present at the mountain base.

The admission to the Rila National Park is free.

The Rila National Park covers an area over 81,046 hectares. Blagoevgrad is its lowest point at 800 m over sea level. The wooden area encompasses 53,481 hectares. 90% of the ecosystem is natural. Besides the mountain, there are four nature reserves in the park.

The Rila mountain ranges have an alpine climate. The precipitation at Musala is 2,000 mm annually. 50% of this is snow. The average is –5 C around August. The highest recorded is 18 C.