Rotterdam is a city as well as a municipality in South Holland. It has a good number of tourist attractions, most notable of which are the Rotterdam Architecture – Netherlands. 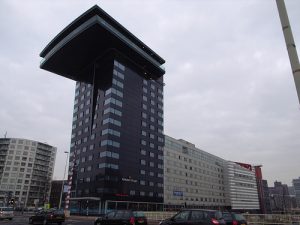 Rotterdam is located in the western regions of The Netherlands. Rotterdam Architecture – Netherlands is spread out across the city. As there are various forms of architectural structure the city boasts of, these are found in various locations around Rotterdam.

There are generally two ways to reach Rotterdam. One is flying in and the other via the railway. Flying in is via the Rotterdam The Hague Airport. It has direct flights from several countries in the continent but not much else.

If you will be coming in from other countries not served by the airport in Rotterdam, your next best option is to fly in to Amsterdam as it serves regular international flights from all over the world.

From Amsterdam, you can take the train going to Rotterdam Central Station.

There are also several train services from different parts of Europe that go to Rotterdam so this is another option if you are already in Europe.

To get to the various sites of Rotterdam Architecture – Netherlands, you can take any form of public transportation available here: trams, buses and metro.

There are various samples of Rotterdam Architecture – Netherlands that you can view here, each one as breathtaking and awe-inspiring as the next. Perhaps the most notable of these are the Cube Houses in Overblaak.

Forty regular houses were tilted at an angle of forty-five degrees to create these cube houses, the very first of Holland.

Another major landmark in the city is the Erasmus Bridge which extends over the Maas River and connects the north and south sections of Rotterdam. It extends eight hundred meters long and has a pylon that reaches up to a height of one hundred thirty-nine meters.

The bridge is also known as “The Swan” because of its dominant white color.

The highest skyscraper in the country is also found here. The Maastoren stands at a staggering height of one hundred and sixty-five meters.

A historical architectural feat is the White House of Rotterdam. It is the very first skyscraper in the continent built in the year 1898.

There are several other excellent examples of Rotterdam Architecture – Netherlands that display the uniqueness and brilliance of the architectural feats of the country.

Notable Rotterdam Architecture – Netherlands in terms of skyscrapers began with, as mentioned previously, the White House of Rotterdam. At the time, this 43-meter high structure was the first skyscraper in Europe.

It comes with an elevator, which at the time was also a huge feat. It is considered as a “daring Dutch architecture.”

When the city was bombed during the Second World War, much of the structures here were destroyed with the exception of the White House and a few other structures.

Following the destruction of the city, re-construction in Rotterdam prompted what is to be known as the historical architectural feats of the city.

Viewing any of the architectural masterpieces of the city generally does not cost anything. Accommodations around the city range from 75 up 79 Euros per room, per night for budget hotels.

Hostels are about 15 Euros while Bed and Breakfast inns are around 65 Euros for two guests, inclusive of breakfast.

The Euromast is one more architectural landmark in the city that is not to be missed. It is an observation tower that stands 279 feet high.